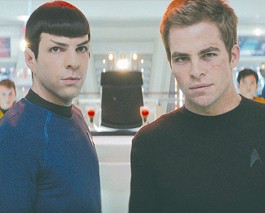 Relearning confidence in tomorrow through the prism of 'Trek'

I won’t comment on the plot of the new Star Trek film or the way director J. J. Abrams relays a familiar cosmology with glittery action, snappy dialogue and voluptuous intricacy. Unlike many fans, I am cold to the “old pals effect,” the tedious crutch of reintroducing the same characters in every sequel.

I care little about James T. Kirk or even Mr. Spock. No, what always entranced me about Trek—helping turn this physicist into a science fiction author—was the vision it offered, exploring human destiny, confronting big issues and pondering a unique notion, seldom expressed anywhere else—that our descendants might somehow be admirable.

Optimism doesn’t come easily to post-Hiroshima science fiction, nor should all tales of tomorrow be sunny. Some futuristic cautionary tales, like George Orwell’s Nineteen Eighty-Four, warn usefully about potential failure modes. If they gird us sufficiently, these stories rise to the august level of self-preventing prophecy.

Other works, and a majority of sci-fi films, base their pulse-pounding, heroic action on a single assumption: that civilization is, and will always remain, stupid, a cliché that can’t be helpful to our can-do, problem-solving spirit.

But that spirit has a home. It’s embodied in Star Trek, an epic storytelling universe that broke with reflex cynicism, asking instead, “What if children can learn from the mistakes of their parents?” Suppose (oh, unique thought!) our heirs begin living up to some of our deepest hopes? Won’t they still have interesting problems, like what to do when we become mighty star travelers? Humanity has yet to crawl beyond the moon, yet we are already contemplating how to behave under the light of distant suns. Shall we interfere in the development of younger intelligent species, for example? Could a mix of pragmatism and sincerity prevent us from repeating the mistakes of the conquistadors?

Premature or not, such thought experiments may be a sign of a precocious maturity, a lifting of the eyes. And many of these ruminations—engaging millions of fascinated minds—have taken place under the banner of Star Trek.

Central to Trek is the image of a large, quasi-naval vessel called Enterprise, based on 19th-century sailing ships like the HMS Beagle, dispatched to practice peacemaking and war, diplomacy and science, tutoring and apprenticeship, all in equal measure. How different from the tiny fighter planes featured in Star Wars, each piloted by a solitary knight, perhaps accompanied by a loyal squire, or droid, symbols as old as Achilles.

In contrast, the Federation starship in Trek is a veritable city, cruising toward the unknown. Its captain-hero is a plenipotentiary representative of his civilization and parent figure to the crew, but during the next adventure, any one of those normal men and women may suddenly become heroes themselves.

Moreover, this ship carries something else, the Federation’s culture and laws, industry and science, its consensus values, such as the Prime Directive, all embodied in the dramatic diversity of its crew. Each time Enterprise passes a test, so does civilization. Perhaps even one worthy of our grandchildren.

Compare this to the old Republic, in the Lucasian universe: a hapless, clueless mélange of bickering futility whose political tiffs are as petty as they are incomprehensible. Sound familiar? The Republic never perceives, never creates and never solves anything. Not once do we see any part of it function well. How can it? The people, the Republic, decent institutions—these cannot be heroes or even helpers. There is no room aboard an X-wing fighter for civilization to ride along. There’s just enough for a knight and squire.

Are critics right that Star Trek is naive for portraying technology as useful and liberating, if at times also dangerous? Or for calling education a great emancipator (as with the Starfleet Academy)? For putting trust in the potential for an honest, decent society?

In fact, the Trek films and television episodes often dealt with outbreaks of incompetence, secrecy, corruption and suspicion of authority, only with the faith that these are the exceptions. When authorities are defied, it is in order to overcome their mistakes or to expose particular villainies, not to portray all government as inherently hopeless. Good cops sometimes even come when you call for help!

Ironically, this image fosters useful criticism of authority, because it suggests that any of us can gain access to our flawed institutions—if we are determined enough—and perhaps even fix them with fierce tools of citizenship. That has happened, now and then. Imagine it happening more often.

Today, for now, cynics rule. But if this hope is futile and naive, then shouldn’t we give up? Suppose, just for a change, it isn’t. What if there truly is a path ahead, through the minefields of our times? One leading to a posterity we might be proud of? Aren’t we more likely to find that twisty, arduous way—and won’t our descendants feel much better toward their ancestors—if we embrace this challenge in the spirit of Star Trek?

David Brin is the Hugo Award–winning author of the bestselling novels ‘Earth,’ ‘The Postman’ and ‘Kiln People.’ His nonfiction book, ‘The Transparent Society,’ won the Freedom of Speech Award of the American Library Association.