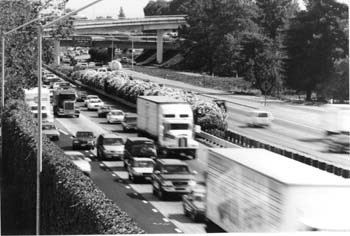 WHEN IT comes to money, Yes on Measure B is the Fortune 500 campaign of Sonoma County’s upcoming March primary. Contributions in the first three weeks of January alone read like a Who’s Who of Big Business and include: Agilent Technologies, $50,000; Advanced Fibre Communications and Fireman’s Fund, $25,000 each; Sola Optical, $15,000; and Mead Clark Lumber, Codding Enterprises, North Bay Construction, and Minatta Transport-ation, $5,000 each.

Measure B spokesman and Sebastopol City Councilman Sam Crump puts the campaign resources at more than $400,000 to promote his brainchild, which would raise sales taxes a half-percent for eight years to raise money for turning Highway 101 into a six-lane freeway from Windsor to the Marin-Sonoma county line, where traffic bottlenecks at the so-called Novato Narrows.

The No on B forces are armed with endorsements that look like a Who’s Who of Sonoma County Environmentalists. But support from the Sierra Club, the Environmental Defense Fund, Sonoma County Conservation Action, the Greenbelt Alliance, and the Sonoma County Land Use Coalition hasn’t translated into cash for the cause.

Gayle Goldstone, spokeswoman for Citizens Against Wasting Millions, laughs when asked if the campaign’s coffer–which turns out to hold a grand total of $13,097–is anywhere close to that of Crump & Co.

“We don’t have a campaign war chest filled with contributions from paving contractors and development interests to get our message out,” she says. “The biggest investment comes from those who will benefit the most. There’s no mystery there.”

Measure B has been dubbed “Ghilotti 4 101,” in reference to one of the initiative’s ardent early backers, Jim Ghilotti, whose large Santa Rosa construction company has annual revenues of about $40 million. Caltrans has hired Ghilotti Construction Co. more than a dozen times in the past two years for public works projects totaling more than $13 million.

While Ghilotti has contributed a substantial amount of cash and in-kind services to the Measure B campaign, he declines to discuss the issue, and his assistant refers calls to Crump. However, in published reports, Ghilotti has said that because of the state’s competitive bidding laws, he would “gain nothing from helping this campaign.”

Crump bristles at the suggestion that the measure is a self-serving windfall for paving and construction interests. “Over half our funding is from the high-tech industry. Why don’t you talk about what their motivations might be? They ship goods all day long, and they want to improve the quality of life for their employees,” Crump says.

“They held a high-tech symposium that identified Highway 101 as the biggest concern of doing business up here.”

Opponents criticize the measure as a financial boondoggle, and maintain that the highway will be widened even without Measure B sales-tax funds. “Measure B talks about [improving] 36 miles of freeway. Twenty-four [miles] have already been allocated for funding,” says Sonoma County Conservation Board member Bill Kortum, a Petaluma veterinarian known as the dean of the Sonoma County environmental movement. “Some of the funds are here, others are on the books.

It can’t be on the books unless the Metropolitan Transportation Commission knows the money is forthcoming.”

Crump counters that “on the books” is just a wish list for widening sections of 101. “It’s not funded. It depends on a bunch of contingencies,” he says. “It’s not happening. If you want to sit around and wait for 20 years, go ahead.”

Caltrans North County Office Chief Saaid Fakharzadeh confirms that almost $72 million has been allocated to add a lane in each direction from Wilford Avenue in Rohnert Park to Steele Lane in Santa Rosa, as well as start the environmental review process for rebuilding the Wilford Avenue overpass.

According to Kortum, a 20-year blueprint recently issued by the MTC, includes funding for widening the Novato Narrows, as well as widening Highway 101 from Petaluma Valley to the Old Redwood Highway interchange, and from Steele Lane to River Road in Windsor.

AN INFUSION of sales-tax money might make the process go more quickly, Fakharzadeh says, but Kortum disagrees. “Twenty years is realistic,” he says. “I don’t care how much money you throw at it, it doesn’t speed it up.

Measure B opponents have long argued that adding more lanes to the freeway will do little to ease traffic congestion, since construction won’t keep pace with growth. Fakharzadeh agrees, citing a study done for the MTC that pegged light-rail transit as a necessary adjunct.

Marin and Sonoma counties, linked by the traffic-choked Novato Narrows, are at loggerheads when it comes to transit (though the counties are working behind the scenes on a rail plan)–and Measure B does nothing but exacerbate the differences, Kortum says.

“They don’t get any advantage out of [widening the highway]. They would rather have commuters arrive by other means,” he says.

If Measure B passes without Measure C, “you sacrifice a rail startup in Marin County,” Kortum says. “Marin County officials are telling me they will fold their tents.”

Meanwhile, Measure B opponents wonder if “three lanes all the way” fans would withdraw their support if they knew that the third lane in each direction would be designated only for car pools during commute hours.

Crump seems anxious to avoid spotlighting the issue, banking instead on a change in the rules requiring all state and federally subsidized highway projects to build high-occupancy vehicle lanes. “The highway will not be built on March 8. It will take several years to get done, and we don’t know what the law will be at the time. There’s a completed study in Sacramento that questions the effectiveness of a car-pool lane,” says Crump, who could not provide a source for such a study.

“I hope they give jurisdiction back to the local level, so the people of Sonoma County can decide whether or not to have [those lanes].”