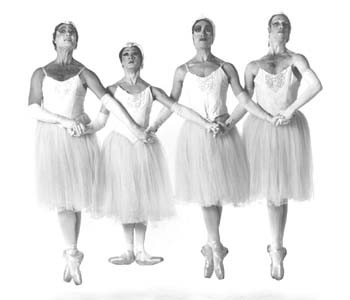 WHEN LES BALLETS Trockadero de Monte Carlo first tottered out onstage in 1974, funny men in dresses were still novel enough to bring in the crowds. But a dance company needs something else to keep selling tickets for 26 years. And for the dance-savvy audiences who come to the all-male classical ballet, the technical prowess and pointe work are what usually draws the applause.

Long the province of lithe young women, dancing en pointe–on the very ends of the toes–is meant to convey airborne grace, creating an elongated line that draws the eye ever upward. Muscular, masculine legs and big feet look altogether different en pointe, and there’s not a lot of institutional support for men in toe shoes. But they belong in them just as much as any ballerina, says longtime artistic director Tory Dobrin.

“There’s no [anatomical] reason why a man can’t dance en pointe,” he says. “God gave everyone the feet they need to support their own weight.”

Collectively, the 15 dancers of Les Ballets Trockadero–all men, all professionally trained–have the feet needed to support the weight of the classical ballet repertory, and to lift it into the realm of physical comedy and brilliant artistic parody.

At the start, says Dobrin, their campy onstage antics did not endear them to the critics, who took umbrage at the idea of spoofing their pure art. But audiences and even other dancers have always loved “the Trocks”: recently, Darcey Bissell, the prima ballerina of the London Ballet, presented the whole company with flowers at the end of a performance.

And the critics have come to realize that Trockadero humor can come only from true fans of ballet. Who else would know the exact moments of comic potential in the choreography and iconography of the art form–the endless curtain calls, the tense on-stage dynamics, and the over-the-top tragedies? For example, The Dying Swan, a perennial favorite, ends up molting feathers all over the stage in a death scene that convulses both the swan and the viewers.

Dobrin insists that the company’s real comic genius is more about character development than gender.

“I never think about it in terms of male bodies in female ballet roles,” says Dobrin. “The steps you learn, whether you’re in Les Ballets Trockadero or in the San Francisco Ballet, are simply steps. The characterizations are all based on emotions that a man or a woman would have. Yes, the costume is different. But once you get used to the costume and pointe shoes, you’re developing a character. That isn’t male or female, it’s just a character.”

Physical differences between the genders do enter into the equation, though, when it comes to the athleticism that Les Ballets Trockadero are contributing to ballet en pointe.

In place of the delicacy, the Trockadero dancers have developed their pointe work to take advantage of the strong legs and greater body mass, much as in figure skating.

“That’s one thing that makes our pointe work more exciting,” dancer Paul Ghiselin says with obvious enthusiasm. “Our turns are quicker, our jumps are higher, and we really fill up the stage with movement.”

Filling up the stage is hard work, as any dancer will testify. The dancers of Les Ballets Trockadero may seem to be effortlessly pulling out the gags, but comedy mixed with dance steps means timing is key, and full-time training is essential. The company trains and rehearses daily for at least six hours and tours for over 40 weeks a year. This is ballet at its finest and most traditionally grueling.

But the Trockadero repertory is even more of a throwback: it is a repository of the classics: Giselle, Les Sylphides, Swan Lake. Paul Ghiselin (known onstage as Ida Nevaseyneva) came to Les Ballets Trockadero five years ago, after 13 years of dancing in the Ohio Ballet, and found the change to classics a refreshing switch.

“I had never danced the truly traditional things,” recalls Ghiselin. “I would have to join another company during the Christmas season to do The Nutcracker only because my company didn’t even do The Nutcracker.”

That emphasis on the classics is a strong positive contrast with much of contemporary American ballet, and it also gives Les Ballets Trockadero a continuing leg up in Japan, which has proved to be a guaranteed moneymaker for these men in tights.

“They’re in the middle of this incredible ballet boom now, similar to what America was in the ’70s. And they have this wacky sense of humor. You can see it in their game shows; they’re totally whacked out,” says Dobrin. “And of course this drag element has no stigma attached to it at all, because they’ve got kabuki, they’ve got an all-female performing troupe called the Takarazuka. So that whole issue was no issue.”

For most of their audiences, though, the Trocks do bring up issues–of gender, art, illusion, and comedy. Substituting men for women in ballet is an amazingly effective way of tweaking some of the supposedly fundamental truths about the dance. But Dobrin brushes away attempts to analyze his company’s impact on ballet.

“You just do what you do, and people hopefully come,” he says. “It’s not really that important. A cure for AIDS would be important. This is just a lot of fun.”