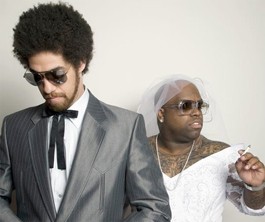 The Odd Couple is this year’s album by yesteryear’s stars Gnarls Barkley, and it begins with a go-go beat, a toy xylophone and a chant of “Ooh-chk-aahh,” lifted directly from Lee Dorsey’s “Workin’ in a Coal Mine.” Savor this moment, because its coy pleasantries swiftly evaporate. A mere 20 seconds in, the album transmogrifies into a hellish, unbearable Dr. Phil universe of codependency and self-help entangled in a delusion of its own importance, and for the next 39 minutes there’s no way out.Like that crappy friend you hate running into who always complains about his life, The Odd Couple contains more neurotic wallowing than a Jewel message board: typical lines include “I’m not doin’ so good,” “Got some bad news” and “My life is a lonely one.” Danger Mouse, Gnarls Barkley’s producer, strains for liveliness with handclaps, Farfisa organs, congas and tambourines of 1960s retro production (or, to be more precise, late-’90s retro production of 1960s retro production—was he passed out on glue when Smashmouth, Austin Powers and the Propellerheads did this to death already?), but it barely lifts the album’s spirits. Worse, it clashes horribly with Cee-lo’s incessant moaning.

This is a far cry from the fun-loving, carefree Gnarls Barkley we once knew, a fake band who paired up almost as a fluke, didn’t take themselves seriously at all, dressed in wacky costumes and were forced to become a real band only when they scored the biggest surprise hit of the decade. “Crazy” appealed to just about everyone, but now they’ve followed that same formulaic avenue, littering the roadside with obnoxious pronouncements about human depression, aiming at the dippiest common denominator. At this careless rate, the only Gnarls Barkley fans left will either be daytime-TV-watching Alanis Morissette fans or quasi-intellectual 11-year-olds on Ritalin who have never heard any music.Worst of all, The Odd Couple commits the ultimate crime: embarrassing the listener for having liked Gnarls Barkley in the first place. It takes everything that was slightly cringe-inducing about their first album, St. Elsewhere, and exacerbates these scratches into horrible open wounds—the “deep” thoughts, the cheeky meshing of styles, the suspension of fun for puling reminders of reality. On “Whatever,” an idiotic, thoughtless sequel to St. Elsewhere‘s “Who Cares,” Cee-lo whines to the listener, “You say fuck me? Well, fuck you, too.” To which the listener says: Right backatcha, Cee-lo. Enjoy the tumble.