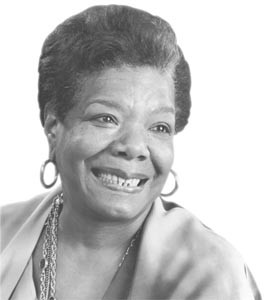 Poetry in Motion: Maya Angelou speaks Nov. 4 at the LBC.

Maya Angelou knows a thing or two about terror. As readers of her 1970 autobiography, I Know Why the Caged Bird Sings, will recall, one of the poet’s earliest memories is of watching her frightened uncle hide from the Klu Klux Klan in a bin of potatoes. Before long, that young African-American girl growing up in the segregated South had graduated to more personal, intimate terrors.

So perhaps it’s no surprise that Angelou, 73, who is among this country’s best-known poets, thinks Americans need to get their fear and outrage about recent events under control.

And that’s the message she intends to deliver when she speaks in honor of Women’s Breast Cancer Awareness Month on Nov. 4 at the Luther Burbank Center in Santa Rosa.

“I will probably speak of courage,” she explains. “The courage to live. And I will draw upon literature to substantiate my point.

“We should be wary, chary, and cautious,” she continues. “But we should fear only God. And I don’t mean fear and trembling. I mean that in the sense of awe.”

Angelou urges a historical perspective. “We have had experiences that were bizarre forever,” says Angelou, speaking in her richly melodious voice by phone from her office in North Carolina. “We came through slavery. We’ve come through wars and rumors of wars. We’ve come through some very serious matters. At this point, I’m more concerned about our fear. I think that we better get ourselves together on that right away.

“I don’t think that one ever gets over the shock,” she continues. “But I am coping with faith and my knowledge of my history. History informed me right away that I must continue to seek for justice. But I also am warned not to lust for revenge. I want the perpetrators brought to justice. But I don’t want to stand in the city square and see them drawn and quartered.”

Angelou says literature can work wonders in a crisis, as it did for her in the years after she was raped as a child–an experience that so traumatized the young girl that she didn’t speak for almost six years.

“I was mute, but my grandmother would put poetry in my hand and I would read it and memorize it,” Angelou recalls. “And she would say, ‘Momma loves to see you read poetry. It will put starch in your backbone.’ That’s what literature does.”

What books might the world turn to in desperate times? Angelou offers a few ideas.

“We could read, for instance, A Tale of Two Cities,” she says. “We could read Norman Mailer. We could read James Baldwin’s The Fire Next Time. Or that wonderful poem by Edna St. Vincent Millay, who wrote, “I shall die, but that is all I shall do for death.”

Angelou says her Santa Rosa appearance will probably also offer the audience a chance to hear some of her own new work: “You will hear some of my poetry, some that you have not heard,” she says.

Indeed, though Angelou is far too modest to suggest it, her own writing–both her deeply personal poetry and her best-selling autobiographies–offers plenty of inspiration for courage. Above all, there is the simple but striking fact that a young girl who once lost her voice in the face of unbearable trauma went on to become an accomplished orator–and the first poet since Robert Frost to write and recite a poem at a presidential inaugural ceremony.

How could a life be so profoundly transformed?

“I think about the love that I’ve had, and that liberates my tongue and my voice box,” Angelou says. “And I think that when we individually and collectively, as a community and as a nation, think of great people who have loved us, we may be willing to let our own fear go.”