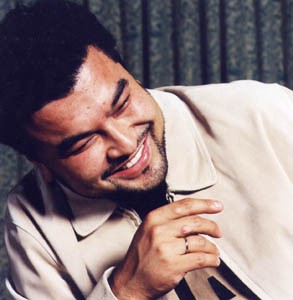 Later Skater: Lyrics Born is part of the Quannum collective that includes Blackalicious, DJ Shadow, Lateef and the Lifesavas.

I’m reminded of a scene from my high school years. I’m sitting at my desk, inwardly scowling at my blonde-haired, pug-nosed classmate, thinking that if a pea brain like her was part of the in crowd, then I was better off sticking with my own dorky friends. There was always the nerd in me that wondered what it was like to be labeled “cool.”

Underground hip-hop works much the same way. Seems like everyone raps about realness, but they’re all for making cheddar. Take Jurassic 5, one of the most well-known underground hip-hop acts, who released Quality Control on the big old Interscope label. Or the Black Eyed Peas, who added a female vocalist to the group to abet the pop-chart crossover “Where Is the Love?” After a conversation with Lyrics Born, an underground rapper on the Quannum label who appears Feb. 13 at the Raven Theater, I–to quote LB’s song of the same name–“changed my mind” on underground hip-hop politics.

Lyrics Born, a.k.a. Tom Shimura, is best known for his work with his Quannum label mates Latryx, Blackalicious, DJ Shadow, Lifesavas and Poets of Rhythm. Last October, LB released his debut solo album, Later That Day…. After years of expounding on everything from his ideal lady to his battling skills, Lyrics Born moves forward. The album features him experimenting with jazz scatting, taking on different personas and working with a live band. And you can always count on his signature Odysseus-like flow, where he takes you from Delaware to Mozambique in one breath.

Lyrics Born is as underground as you can get for someone of his stature. He lives in the Bay Area, rotates driving duties while on tour and produces his own songs. That said, he’s happy to be featured on … MTV2? He explains that gaining exposure had a lot less to do with selling out than it did with internal ambitions.

“I want to look back 20 years from now and know that I really gave it the best that I could,” he says. “I want to still be touring, still be making records, and know that I did what I wanted to do and what I set out to do. But I also want bigger albums and bigger tours. I can’t think of a single artist that doesn’t want to sell a lot of records and do cool and new interesting shit. But it’s not going to make it or break it for me if one radio station won’t play my record.”

Later That Day… is a rambling, revealing peephole into mundane worries, relationships with friends and family, and dodging creditors. The album has received gold stars from hip-hop heads for its funky mesh of ’70s and ’80s production styles that complement his unmistakably soulful croon. Whether he’s singing along with the bass hook on “Callin’ Out” or dicing it up with Lateef on “The Last Trumpet,” Lyrics Born manages to tell truths while keeping the booty bouncing in the red.

He blends breakneck delivery with ridiculous wordplay on “Do That There.” He spoofs the sad state of his bank account in the skit “U Ass Bank,” where a less than cordial operator tells him, “Please enter the last three digits of your social conformity number” then informs him, “You have no fucking money.” “U Ass Bank” moves from funny to profound; some hip-hop artists tout their “brokeness” as evidence of their credibility, but wanting recognition on a wider level is just as legitimate as a desire for financial stability. Nothing’s realer than being broke.

“I really don’t consider myself established yet,” the rapper admits. “I’m definitely not where I want to be. But just to get to this point has been 100 percent commitment and sacrifice. There’s a lot of ways to achieve artistic and financial goals without going the conventional route, and I just want to never stop creating.”