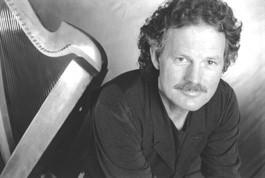 For an 84-year-old page-turner about romance and adventure, storyteller and musician Patrick Ball’s copy of Tristan and Iseult is still in impressively good condition, but the hand-painted Dewey decimal number on its spine belies its status as legitimate private property. Ball first came across the diminutive volume as a grad student during the early ’70s while wandering the library stacks at Dominican, looking for something to pique his interest.

“It was like opening a pop-up book,” Ball says, sitting on a stool among three small harps in a cozy, pitched-roof studio that stands behind his Sebastopol house. In measured tones, he describes how the story captivated him. “It was filled with certainties and had a palpable system of values, and it came at a time when I was looking for something I could be passionate about.”

When he finally thought to return the book, long overdue, he instead ended up wheedling the librarian into giving it to him in exchange for a giant, numbered folio of early California lithographs.

Adapting the little book’s story, Ball, now a storyteller of some reputation, performs a new piece, The Flame of Love: The Legend of Tristan and Iseult, beginning May 18 at Spreckels. Ball’s most widely received performance is an original tale, O’Carolan’s Farewell to Music, about the last Irish bard, a harpist of the 17th and 18th centuries. Perhaps his most curious claim to fame is a 1987 recording of “The Ugly Duckling” with the one and only Cher.

Ball’s library book is a reprint of one written in 1900 by the French author Joseph Bédier, who pieced together the story we now know as Tristan and Iseult from various strands of a Medieval pan-Celtic legend that was probably rooted in Arthurian lore. The tale may have a loose factual basis: Tintagel Castle, one of the story’s settings, still exists in Cornwall, and King Mark, a main character, actually ruled there during the early sixth century.

The story’s plot is complex, but centers on a love potion earmarked for Iseult’s wedding night with husband-to-be, King Mark. However, she and Tristan mistakenly drink it together in transit to the wedding and fall tragically in love. This mal-distribution causes a series of painful moral dilemmas for these Medievals, to whom honor means everything.

With his usual understatement, Ball tells the lovers’ story using only gestures and sounds. This time, however, Ball, who usually goes solo, will be accompanied by two other musicians, the so-called Medieval Beasts. Shira Kammen plays the vielle, a type of early violin, while Tim Rayborn plays the psaltery, an instrument that looks like an auto harp, in addition to the lute and hand drum. Both Kammen and Rayborn will also play the Medieval harp and sing, while Ball weaves the tale and accompanies himself with a rare, metal-stringed Celtic harp.

Ball explains the hazards of mixing storytelling and music, as each brings its own potentially competing rhythm to the stage. For him, early music is particularly vital for this performance, because it helps a modern audience adopt the mindset of Tristan and Iseult‘s original listeners, making it easier for us moderns to accept some of the tale’s more fantastical elements and strict moral setting.

To tell a story about how music helps the imagination transition into other modes, Ball slips into his favorite role as storyteller. With the harp standing before him, he says that while studying history, he encountered a “veil separating [one] from the past,” a veil that his best professor could almost lift, but never completely.

But one day, while strolling through a Renaissance fair, he says he “heard a sound from 200 years ago.” Drawing his neatly trimmed fingernails across the metal-stringed harp, Ball makes a short glissando–the quintessential storyteller’s flourish. He continues, “And that pushed the veil away.”