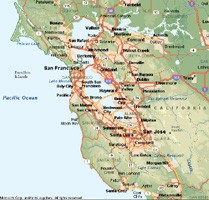 I‘m proud to report that I’m partaking in one of those postmodern, California experiments that spring up every now and again. I’ve become a Locavore for the month of May. It’s not what it sounds like; I can assure you that I will not be eating the mentally ill this month. I will, however, be eating only local foods, grown within 100 miles of my house.

Being a Locavore is way harder than one would think. If my whining won’t convince you, check out your cupboards. I think you’ll see imported pasta from Italy, weird cookies made in New Jersey and honey from Mexico. Then check out the fridge–organic strawberries from Chile? New Zealand apples? Get my drift? I have to clear that all out and buy Marin beef and Santa Cruz berries. Poor me.

The idea with Locavores, started last year in August by a group of food lovers, sustainable-ag types and environmentalists, is to raise awareness about locally grown food, trick people into eating their vegetables and support local farmers. Now, why should anyone reading a car column care about this? Petroleum use, stupid.

All of those exotic and imported foods in your kitchen require huge amounts of petroleum to get to the grocery store. When we Americans sit down to a meal (or, even worse, drive around in our cars eating fast food), we happen to be eating a lot of petroleum.

The average fresh foodstuff in America has traveled 1,500 miles in order to reach us. Consider the trek of the Southern chicken: grown in Georgia, processed in Arkansas, then trucked thousands of miles over here in refrigerated trucks that suck tons of gas. Compare that to a local bird from Sonoma County, which travels an average 100 miles to reach us.

How about bananas boated up from South America–we’re talking 5,000 miles of travel. That’s a lot of oil burned for some fruit in your morning cereal bowl. And if we consider processed food, the petroleum input skyrockets. From farm to fork, processed food travels an average of 3,600 miles!

Huge amounts of petroleum are also used in industrial agriculture. From the petroleum-derived fertilizers and pesticides to the fuel running the huge combines, big farms suck up a lot of energy. Scientists have calculated that over seven calories of fossil fuel is burned for every one calorie of energy from food.

As the fuel crunch continues, food fuel costs will eventually have an impact on the already spiraling price of fuel. You’ve seen the prices. I would wager that this summer, in California, we’ll see prices above $4 per gallon. Doesn’t it seem wasteful that we are using so much oil in order to eat strawberries year-round?

It’s just not something most people think about. One article I read suggested that fuel miles be stamped on the package, just like calorie listings. That way consumers would have a reminder about where their food came from every time they went shopping. That’s about as likely to happen as me winning an Oscar, but it’s a good idea (the labeling, not the Oscar).

By eating local, you aren’t further filling the coffers of those greedy guys at Exxon, Shell and BP. I know they’ll make a bunch of money whether we buy their product or not, but somehow it just makes me feel better, more ready for when we’ll have to build a local economy because of necessity, not as a game.

Take the leap! The Locavores challenge runs through May. And know that it isn’t quite a orthodox religion, you can set up exemptions for food goods you don’t want to give up and can’t find locally–like coffee, baking powder, salt or, in my case, lapsong souchong tea (ain’t nobody making that local). It’s a great-tasting way to help conserve our precious resources.