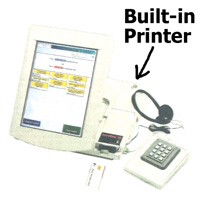 But is California ready for the coming elections?

For as long as she can remember, Eve Roberson has considered it her job to guard the right to vote. A former elections administrator who lives in Santa Rosa, she dreams of a day when every eligible voter will use a paper ballot, and the outcome of every election will accurately reflect each voter’s choices.

In the meantime, Roberson keeps a watchful eye on the electoral process, with voter registration and the questionable security of electronic voting systems dominating her attention. At present, she’s cautiously optimistic about changes to CalValidator, Republican Secretary of State Bruce McPherson’s system for verifying voter registration forms.

Previously, it was county election officials, not the secretary of state, who ensured the accuracy of California’s voter registration records. But in accordance with the federal Help America Vote Act (HAVA), McPherson assumed that responsibility in January. Since then, CalValidator has rejected tens of thousands of eligible voters.

“It’s a barrier to voting,” says Roberson. “It reminds me of what I saw in Ohio and Florida.” Before the 2004 election, Roberson registered voters in the pivotal state of Florida; after that election, she helped monitor the Ohio recount. During those weeks in Florida and Ohio, she saw firsthand how burdensome regulations can determine the outcome of an election.

Here in California, McPherson has caused unnecessary delays in validating voter registration forms. A driver’s license number, state ID card or the last four digits of the Social Security card are required by HAVA for every voter. Though this information is usually readily available in state databases, McPherson insisted that election officials obtain it personally in each instance from rejected applicants. Unlike McPherson, HAVA has no problem with election officials entering known ID numbers without first contacting applicants.

Another problem was that CalValidator rejected registration forms submitted by voters whose last names contain spaces or apostrophes, such as “de la Cruz.”

In February, Sen. Debra Bowen, D-Redondo Beach, who chairs the Senate Elections Committee and is the California Democratic Party’s choice for secretary of state next November, joined county registrars in calling on McPherson to address the alarming rate of rejections for voter registration forms. But despite persistent complaints, McPherson initially intended to keep the regulations in place until after the June primary, explaining, “The need for changes or additions to the regulations may only become apparent once their functionality has been observed in the course of an actual election.”

McPherson had also contended that existing federal and state law prevented him from making changes. But after weighing the matter, on April 18 the Legislative Counsel of California announced that nothing in state or federal law prevents the secretary of state from changing the regulations. McPherson relented.

CalValidator has since been adjusted so that it no longer rejects registration forms with names that contain apostrophes and commas. Also, elections officials can now enter missing ID numbers that are already available in state databases. But in heavily populated counties, the expected flood of new registration forms between now and the May 22 deadline, combined with the current backlog of rejected registration forms, is likely to force some eligible voters to use provisional ballots, which may not be validated in time for their votes to count.

Fortunately, the regulations haven’t been much of a problem in the North Bay, where populations are comparatively low. At the end of April, only between 50 and 100 registrations remained unresolved in Sonoma County; five out of 100 voter registration forms per month had been rejected in Marin County; and only 73 voters whose registration forms were rejected remained on “eligibility pending status” in Napa County.

Even so, voting system security is a hot topic. Current concerns include certification of e-voting machines, the pros and cons of secret voting software and equipment and the reliability of recounts.

All three leading voting system vendors–Diebold, ES&S and Sequoia–have come under intense scrutiny across the nation. Problems in 2006 have included faulty or uncertified software and equipment, late delivery of ballots and other essentials, inaccurate ballots and more.

Last September, Bowen addressed the software issues by introducing SB 370, which is now law and requires all electronic voting machines to produce a paper trail. The California Association of Clerks and Election Officials opposed the bill, predicting time-consuming paper jams and other problems.

Bowen promptly urged McPherson to reverse his decision to recertify the TSx, but to no avail, and in March, the nonprofit group Voter Action sued McPherson and 18 counties, asking the court to reverse the secretary’s decision. Since then, seven of the counties named in the suit, including Marin, have sworn off the Tsx, and the judge has excused them.

About 50 percent of North Bay voters use absentee ballots, which are counted by optical scanners. Bowen has held two hearings to assess absentee-ballot procedures and optical scan systems and is planning a third for later this year.

Meanwhile, Sonoma County is spending virtually all (nearly $5 million) of its “free” HAVA and California Voting Modernization Act funds on 700 electronic voting machines and five years’ worth of maintenance and software leasing. The machines will satisfy HAVA’s mandate for at least one voting machine in every precinct that allows disabled voters to cast their ballots in private and without assistance.

Janice Atkinson, Sonoma County’s assistant registrar of voters and candidate for clerk-recorder-assessor, says she’s pleased to provide the machines to disabled voters, but she’s not interested in purchasing more for the remainder of Sonoma County voters, who use the optical scan system with no problem.

“Why would you spend billions of dollars on equipment that will sit on the shelf for 363 days of the year?” she asks. “In five to 10 years, it’s obsolete. What are we going to do with it?”

Both Atkinson and Bill Rousseau, Sonoma County’s assistant tax assessor, say they have complete confidence in the DFM optical scan system, which has been in use for 20 years. Also like Atkinson, Rousseau is a candidate for Sonoma County clerk-recorder-assessor (the registrar of voters department is part of the clerk’s office). This race will be decided in the June primary, as both Atkinson and Rousseau are registered Democrats (though Rousseau has been endorsed by several prominent Republicans).

Napa County uses the Sequoia electronic voting system as its primary system, and the Sequoia optical scan system to count absentee and provisional ballots. In Marin, the primary voting system is Diebold’s optical scanner and disabled voters will cast their ballots on ES&S Automark machines.

For optical scan and electronic voting systems alike, California State Assembly Member Jackie Goldberg has introduced AB 2097, which requires voting system vendors to disclose all technical details, including source code, when applying for state certification. The bill also stipulates public testing of the machines and prevents the secretary of state from adopting a voting system until its operations are publicly disclosed.

McPherson, who opposes AB 2097, says, “Allowing unqualified, nonexpert access to source code and providing detailed instructions for building voting systems software could compromise the system security and result in the manipulation of elections.”

Bowen supports AB 2097, which will be heard by the Senate Appropriations Committee on May 10. If this bill becomes law, it will become effective by June 30, 2007.

Regardless of the fate of AB 2097, Roberson urges Napa County voters to avoid the controversial electronic voting machines. “Ensure that your votes are on auditable paper ballots by registering as permanent absentee voters,” she says.

In spite of the pervasive problems with the electoral process, Roberson remains upbeat and has two words of advice for any citizen age 18 or over: “Register,” she stresses, “and vote!”