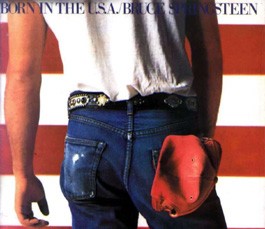 Three takes on Neil and Bruce, Bush and Seeger

Editor’s note: Music writers, man, oh man! Karl Byrn bagged the Neil/Bruce gig weeks ago, and this editor womanfully knocked other writers from trees and shook them from bushes to protect Karl’s stake. Then Sara Bir and Gabe Meline simply leapt down from the skies without warning, armed with the same topic. To hell with it.

Tribute albums good and bad appear with increasing frequency, and there seems to be no end in sight. Already 2006 has seen tributes to Elliott Smith, KMFDM, 7 Seconds and Morbid Angel, and tributes to EYEHATEGOD and Pet Sounds will join them before the year’s close. People keep on buying the things because they provide a safe gamble, painting the familiar with at least a few degrees of unfamiliarity.

There’s the single-artist tribute album, in which one performer interprets the songbook of another, as with John Hammond’s Wicked Grin, an album of Tom Waits songs, or Kathy McCarty’s Dead Dog’s Eyeball, an album of Daniel Johnston songs. There’s the various-artist re-creation of an entire album (Badlands: A Tribute to Bruce Springsteen’s Nebraska) and the single-artist re-creation of an entire album (Petra Haden Sings: The Who Sell Out, a one-woman, a cappella overdub-fest).

The unlikely-genre tribute album produces examples like Dub Side of the Moon, a reggae-dancehall take on Pink Floyd’s Dark Side of the Moon, and Gold Sounds, a jazz quartet playing the songs of Pavement. Tracy Thornton’s Pan for Punks: A Steelpan Tribute to the Ramones drips with jolly tropical-resort flavor and scores novelty points, but for most listeners, the charm wears off a few songs in.

The above examples are from the high end of the tribute-album spectrum. There’s a bunch more that are uninspired, unfocused and terribly uneven. Tribute albums work best when they have more of a point than simply packaging a bunch of disparate covers for the novelty of it. Even an abundance of respect for the subject of the tribute isn’t enough; there needs to be a desire to create a new channel of listener accessibility, a reason to put the song out there for other people to carry on in the first place.

With music that is in no danger of slipping from public consciousness, most folks would happily forgo the covers in favor of spinning the real thing. Does the world, at this moment, really need Cars, Smashing Pumpkins and Queen tribute albums? Too late, because the world got them last year, and now they populate used CD bins across the country.

The tribute album may be a phenomenon of the past decade or so, but the idea behind it isn’t new at all. Chet Atkins Picks on the Beatles or Connie Francis Sings Italian Favorites weren’t billed as tribute albums at the time of their release, because back then they were exercises in commerce more than creativity. If a song was popular, everyone recorded it, a practice going back to the era before recorded music, when songs, not their performers, were the star. Such superstar songs form the backbone of the American folk-song canon, the stuff that seminal folkie Pete Seeger devoted his musical career to passing down.

Bruce Springsteen’s We Shall Overcome: The Seeger Sessions (Columbia) differs from most tribute albums in that Pete Seeger, who is ostensibly the subject of the tribute, didn’t write any of the songs included on the CD. What Seeger did was gather and popularize those songs, which include “Eyes on the Prize,” “Pay Me My Money Down” and “Shenandoah”–and Springsteen’s approach was to continue doing so.

“You forget how great they were,” Springsteen says of the songs on the CD’s accompanying DVD. “They’re music that gets lost by the fact that it hasn’t been recontextualized. Sometimes, if you recontextualize the stuff a little bit, it comes to life again. If they don’t get picked up again, you can forget all the life that’s in them, all the human experience that’s in them.”

That’s the mission behind We Shall Overcome, but the album succeeds because it thrums with heartfelt spontaneity; the musicians are audibly enjoying themselves. While Seeger’s recordings of these songs are mostly accompanied by nothing but a sparsely plucked banjo, Springsteen invited a 17-member backing band to belt out these tunes over a three-day period in a studio improvised in his living room. In his recordings, Seeger often cues listeners to sing along–he provides the tools for a DIY hootenanny–but Springsteen gives you a full-formed party in progress.

An album like We Shall Overcome is an invitation to participate in a chain that goes back hundreds of years. The current glut of tribute albums can only wish to be so vital.

Springsteen’s lively set of centuries-old folk songs made popular by Seeger has predictable connections. Seeger’s archival instincts and his history with the Civil Rights and labor movements complement Springsteen’s ongoing activism and desire for a redeeming roots-based group hug. These covers of standards were recorded in an intimate live setting with rustic, all-American instruments like accordion, banjo, fiddle and three-piece horn section. While the songs could often use a subtler or more sober treatment, the rollicking robustness does emphasize the Boss’ optimistic call for a renewed society based on communal tradition.

It’s no surprise that Springsteen would make music that takes a stand on justice, wealth-distribution and peace. Articulating the irresolution and better hopes of the common American is what he does best. Despite the irony of anticapitalist songs being recorded by a multimillionaire for one of the largest corporations on the planet, The Seeger Sessions are consistent and genuine. Springsteen’s agenda to honor progressive political sentiments are worn on his sleeve, thinly concealed by the swinging, easy-going, good-time-old-time feel.

While the Boss’ everyman politics are clear, Neil Young’s stance on issues has always been a bit more slippery. He’s been both a hippie liberal and a bread-basket conservative–knocking Nixon, applauding Reagan–and now he knocks Bush savagely on his newly released Living with War. Young generated a load of prerelease buzz for the disc with the scathing sound bite-driven cut “Let’s Impeach the President,” a hard-rock accusation that follows the gentler folk side of Neil heard on last year’s acclaimed Prairie Wind.

Young’s pattern of work calls for a loud and edgy electric disc this time, and here, with a power trio, trumpet player and choir, he takes the opportunity to lock on to the theme of the current administration’s betrayal of America. He faces topics openly (“Today’s the day my young son is going off to war”). “The Restless Consumer” repeats an imploring chorus of “Don’t need no more lies,” and on “Lookin’ for a Leader,” Young flat out names Colin Powell to atone as Dubya’s replacement. “Shock and Awe” admits disillusion and calls the Iraq War a mistake.

But Young’s values are also conservative: family and freedom and American pride are paramount. He’s anti-Bush and antiwar, but his liberalism stops there. A straight, sweet version of “America the Beautiful” closes the disc with yearning patriotism. The album rocks, but not fiercely so, and as a result, Young’s displeasure and demand for change don’t seem so radical in the normal course of his mood and style swings.

The power of both discs is that the two veterans believe they’re stimulating discussion of vital ideals. Springsteen’s left-leaning enthusiasm and Young’s patriotic rebellion are both unfinished and complex searches for a better American culture.

Even before Neil Young’s new album was released this week, it had received more media attention than any album of his in the last 10 years. It is his Bush-bashing album, and is being unanimously hailed by critics as a daring move in speaking out against the atrocities of our corrupt administration.

The album was written and recorded in just 12 days. Reprise initially delayed the album because, they said, they needed to figure out a marketing plan, until someone probably pointed out the president’s all-time-low approval rating and said, “Hey, your marketing plan’s right here.” Living with War then quickly entered rush-release from the label’s parent company, Time Warner, complete with corporate ties to what is often referred to as the war machine.

Young has dabbled in politics before, most recently on his post-9-11 commercial flop Are You Passionate? where he retold the events of United Flight 93. His most well-known political anthem, “Ohio,” recalls the events at Kent State in 1970, and “Southern Man” sings from the point of view of a racist Confederate. Young is good at retelling, and his socially conscious songs generally sound like campfire stories.

But Living with War makes a direct, proactive statement. “Let’s Impeach the President” is the most aimed and focused political statement Young has ever made. The song calls out the Bush administration for lying and leading the country to war under false pretenses, exploiting actual sound clips from Bush’s speeches. Plenty of cut-and-paste video clips on YouTube.com have proven how fun and easy it is to manipulate Bush’s oratories, but the message, at least, is that this guy has got to go.

There are a number of meandering moments on Living with War, not the least of which is the song “Flags of Freedom.” The lyrics slip into retelling mode, filled with outdated, clichéd images of wartime: the going-away parade, the flag-lined Main Street, the proud parents. Even the heartbreak is outdated (Young seems to be unaware that it is 2006, when no one gets their news from watching television sets in the window of an appliance store), yet outdated heartbreak is still pointedly effective in Young’s hands.

It would be absurd to expect a star like Young to lash out any more strongly than this, either in his original songs or by covering, say, the Dick Lucas songbook. His consolable half-protests have earned him a wide audience, and critics have said Living with War is the album that will send the message straight to the administration itself. It will surely hit more than a few charter school parent-teacher meetings along the way.