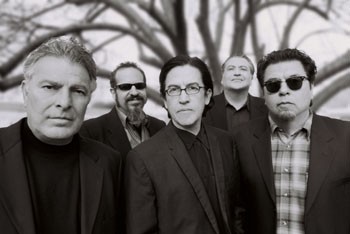 Buy one of the following Los Lobos CDs from amazon.com:

Born To ‘Ride’: Los Lobos return to what they do best.

Wolf at the Door

A cold, wind-whipped rain made for lousy driving that stormy Tuesday night as I cruised to Uncle Charlie’s, a popular but now defunct nightclub tucked into a nondescript Corte Madera strip mall. A few minutes earlier I had been high and dry, sequestered comfortably on the couch in the living room of my Fairfax apartment. The phone call from the manager at Uncle Charlie’s roused me from my pipe dreams.

“You gotta get down here tonight to catch these guys,” she enthused. “The band’s name is Los Lobos. They’re from East L.A., and believe me, they’re gonna be big some day.”

As it turned out, I was one of only two dozen people who saw Los Lobos that night at their North Bay debut 20 years ago. During a preshow interview in the tiny dressing room, guitarist and singer David Hidalgo passed a silver flask of whiskey that he kept tucked into his vest pocket. After a blistering set, the band lived up to the club manager’s promise.

Los Lobos went on to be big, indeed, garnering Grammys and gold records and a reputation as one of the tightest live acts in the industry.

Over the years, I’ve caught Los Lobos on numerous occasions and count many of those concerts as among the best I’ve ever seen, but I have to confess to walking out on their show at the Mystic Theatre last year. That night the band were sloppy, excessively loud and prone to longwinded instrumental jams, never their strong suit.

So it’s satisfying to discover that Los Lobos have reined in their excesses on the newly released album The Ride, arguably the band’s strongest recording in a decade. The Ride features an all-star cast of guest artists–including Dave Alvin, Richard Thompson, Elvis Costello, Tom Waits, Café Tacuba, Bobby Womack, Garth Hudson and Ruben Blades–playing on a handful of new original songs and reinvented favorites.

The band members produced this follow-up to 2002’s acclaimed Good Morning Aztlán, cloaking these songs in a richly textured array of musical styles, from ’50s-style rock and roll, funk and an ethereal Beatlesque production to jazz, salsa and rock en español.

But despite the eclectic approach, these recordings bond remarkably well under the influence of Los Lobos’ patented norteño-inflected border rock. The songs run the gamut from the opening “La Venganza de los Pelados,” a rock en español number that features the Mexican hipsters Café Tacuba, to the swampy New Orleans-style hoodoo of “Charmed”; from Tom Waits’ sassy Latin-soul duet with Quetzal singer and percussionist Martha Gonzales to Elvis Costello’s piano-ballad treatment of the plaintive “A Matter of Time,” first recorded on Los Lobos’ 1984 breakthrough album How Will the Wolf Survive? On the wistful “Somewhere in Time,” on which Dave Alvin croons in his deep baritone, there is a sense that Los Lobos have dug deep to regain the soulfulness that first infused the Latin-flavored roots music that made them one of the top rock acts of the ’80s and early ’90s.

On the remake of “Is This All There Is?” the band finally get to pay homage to one of their spiritual predecessors, as vocalist Little Willie G., of the seminal East L.A. Latin-rock band the Thee Midnighters, lends his woefully underrated brown-eyed soul to this song from the 1987 album By the Light of the Moon.

For a band that once reinvented itself through bold experimentation to now revitalize itself by staging such a stunning return to form should stand this year as one of pop music’s most impressive achievements.

Jerry Garcia’s solo albums never generated as much heat as the Grateful Dead’s recorded oeuvre, and there’s little chance that this meticulously packaged six-CD box set will win any new listeners. But diehard fans won’t be disappointed by the ample bonus tracks (though those aren’t always revelatory) that augment Garcia’s five solo works, or the sixth disc of previously unreleased tracks, or the gorgeously crafted 130-page booklet, chock-full of photos, essays and discography.

As with the recent Dead reissues, these discs are digitally remastered and presented in high-definition sound. While Garcia’s solo work was wildly uneven, casual fans may want to look for individual volumes to hit the stores later this year–the guitarist’s 1972’s self-titled solo debut, which featured “Sugaree” and “The Wheel” is a must-have, since it serves as a mate to Workingman’s Dead and American Beauty, perhaps the Dead’s best works.