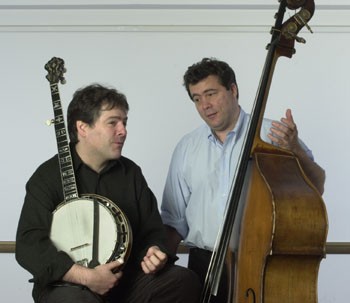 Strange Soundfellows: Bela Fleck’s banjo and Edgar Meyer’s bass sound better together than perhaps they should.

Fleck and Meyer are two of a kind

Banjo and string bass are not your usual lead instruments, but in the virtuosic hands of Béla Fleck and Edgar Meyer, they shed their lowly status to become vehicles of astonishing musical fusion. In their newly released Music for Two (Sony Classical), the duo cover material from Bach to Miles, touching musical reference points that range even further afield while maintaining a sweet, improbable coherence.

Consider the opening track, titled, with characteristic Fleckian whimsy, “Bug Tussle.” It starts with a bright, lively melody, briskly plucked with pizzicato bass counterpoint, then it quickly shifts into a new melodic line, this time lyric and legato with bowed underpinnings. And back again. Then, as the melodies begin to merge, the playing styles intertwine, everything melds into a completely natural cadence, and it’s over. A burst of applause confirms that it was all done live, and then they’re off on a Bach invention. And so on.

Although Fleck and Meyer have occasionally made music together over the past 20 years (including their shared membership in the progressive bluegrass band Strength in Numbers in the late 1980s), this is their first pure duet recording. But both men have a history of pushing the limits of their instruments far beyond traditional roles. Fleck’s jazzy explorations with the Flecktones earned him a higher profile with popular-music fans, who have come to embrace that ensemble as an unconventional jam band.

“I think our music has a little bit too much structure to really legitimately be called ‘jam band’ music,” Fleck told interviewer Daniel Taylor, “because there are a lot of jazz elements to it and bluegrass elements, and just a lot of structure. But there’s a lot of improvisation, too, which is where we do fit.”

Meyer, on the other hand, approaches their collaboration from a deep background in classical music that began with bass lessons at age five. The only bassist ever to win the prestigious Avery Fisher Prize, Meyer was lauded by The New Yorker magazine as “the most remarkable virtuoso in the relatively unchronicled history of his instrument.”

Meyer has been a featured soloist with many major orchestras, and performed his own Double Concerto for Double Bass and Cello with Jeffrey Kahane and the Santa Rosa Symphony back in January 1999. At the same time, he has done session work for such disparate pop artists as Garth Brooks, Bruce Cockburn, Lyle Lovett and the Chieftains. He even earned a MacArthur Foundation “genius grant” in 2002.

While Fleck honed his improvisational chops, Meyer flexed his compositional skills in projects blending classical and traditional styles and players, such as the Grammy-winning Appalachian Journey disc, on which he played with cellist Yo-Yo Ma and fiddler Mark O’Connor. He also toured extensively in a trio with Fleck and mandolinist Mike Marshall in the late 1990s.

Fleck was among the featured players on Meyer’s 1997 recording project Uncommon Ritual, and the two reversed roles for Fleck’s classical crossover disc Perpetual Motion in 2001. The notion of paring things down to a bass-banjo duo grew out of those sessions, and the two set out on tour together. That worked, so they did it again, adding new compositions to augment the classical repertoire they had adapted, ultimately recording the performances that make up the new disc.

It’s an impressive showcase, including classical improvisation (Meyer’s “Canon”), crystalline readings of Bach keyboard works transcribed for their instruments, a few unorthodox moments where Meyer’s agile bass takes the melodic lead and a furious, breakneck showdown on their joint composition “Woolly Mammoth.” (While his occasional moves to the piano provide some welcome tonal variety, Meyer’s keyboard work invokes too much George Winston and not enough Schumann.) Fleck also plays a little guitar, just for a change, here and there.

Throughout, the compatibility of their two primary instruments is uncanny. As they comment in the liner notes, “Both instruments overlap in register considerably, while retaining a large register that is their own. Both instruments have idiomatic methods of accompanying and of carrying the melody. Both instruments have played notable roles in 20th-century American music, the five-string banjo in bluegrass and the bass in jazz. But most of all, they just sound good together.”

Local listeners will be able to judge that for themselves, when Béla Fleck and Edgar Meyer perform together at the Mystic Theatre in Petaluma on June 1, capping a series of three Bay Area concert dates on their current tour.