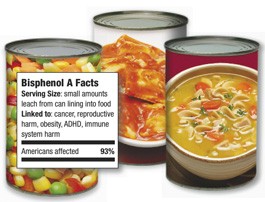 Professor Smart, marking statistics exams with a red pen, says dryly, “Grade these—that would be a gift. Besides, I hate commercial holidays.”

“But Mom, this gift is anticommercial!” says Sally. “And it involves statistical analysis.”

The professor looks up. “Really?”

“Yes. You are going to eat for a whole week without packaged foods—no cans—and reduce the BPA levels in your body by 60 percent.”

“BPA?” Professor Smart wrinkles her brow. “Uh, the creeps who destroyed the Gulf?”

“No, Mom. BPA is a chemical present in canned foods we eat at home or in restaurants. Canned drinks, too. It’s an endocrine disruptor that researchers believe may play a role in breast cancer, prostate cancer, early puberty, obesity, diabetes and attention deficit and hyperactivity disorder. The Centers for Disease Control claims BPA is detectable in 91 percent of Americans.”Professor Smart shrugs. “I’ve never seen BPA on a can label.”

“Mom, it’s not put into the food. It’s applied to the lining of the metal can to create a seal,” explained Sally. “But it leaches into the food. A study with some Bay Area families showed that by taking canned foods and beverages out of the diet for a while, BPA levels in children and adults dropped an average of 60 percent. So as part of my Mother’s Day gift I’ve printed out a little card to post on your fridge. It says, ‘Eat fresh food. Store food in glass or stainless steel containers. Avoid plastic water bottles. Don’t microwave food in plastic.'”

“I see you made two cards,” says Sally’s mother, accepting the card. “I thought this was just for me, a Mother’s Day scheme.”

“It’s a gift for both of us. If BPA is an endocrine disruptor,” says Sally, “the odds of my becoming a mother myself someday—and having a child that won’t hit puberty at the age of six because of hormone dysfunctions—greatly depend on what I eat and drink. So my kitchen and my body are becoming BPA-free zones. Happy Mother’s Day!”

Fuel and the Arts