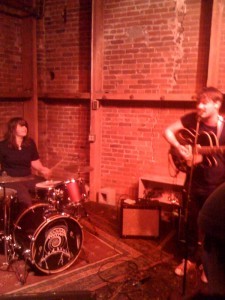 They write jingly-jangly tunes that brim with infectious energy tempered by a certain dark edge.On Friday April 15, Sonoma County got it’s own dose of fuzzed out, edgy garage rock when up-and-comers Sharky Coast played at the Arlene Francis Center. Still in their teens, the members of Sharky Coast draw on musical influences (The Troggs, 60’s surf music) from way before their time.  Just out of high school,  Nick O’ Rooney slings his guitar high, singing and strumming crunchy, wizened blues-based chords.  Drummer Christine Ortmann holds a steady beat, punctuated by brash, ringing symbol crashes. She tends to grin when she hits the symbols particularly hard. It’s always rad to see a band that’s genuinely having fun; that enthusiasm tends to travel into the audience, and Friday night was no exception.  The band has been playing house shows, coffeehouses, open mics for the last couple of months. In an post show conversation O’ Rooney revealed that this was one of the band’s first shows at an actual venue with a stage.Ortmann says that she and the intrepid guitarist met over MySpace and bonded over a  love for garagey indie rock. O’Rooney, who wears a gray cardigan that looks like it might have once belonged to a math teacher in 1962, lights up at a comparison to Thee Oh Sees mastermind John Dwyer. “They’re one of my favorites,” he says with a big smile. O’Rooney says that he’s been looking for more bands that played garage rock in the North Bay, without much luck thus far. He hadn’t heard of Sonoma County’s resident garage maestros Huge Large, but said he’d check them out. A show with another local garage rock band was arranged right there on the couch, the plans yelled over a banjo being played by the Hootenany band on stage and, well…hey…isn’t that just how a scene gets going?Sharky Coast has a demo coming soon and Facebook Page. They play on  Saturday, May 14  with Derailed Freight Train and The 50/50’s at the Toad in the Hole Pub. 116 5th Street, Santa Rosa 707.544.8623