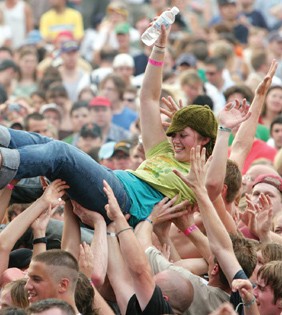 From One Girl to Lots of Others: Our tasteful crop disguises the ungodly filth of this woman’s feet.

Chicago. It’s the town that Billy Sunday couldn’t shut down, and neither could Lollapalooza, although the resurrected meal ticket for Perry Farrell gave it the old college-dropout try. Cancelled last year due to poor ticket sales and now revamped as a single two-day festival in Chicago, the wheezing cultural behemoth of Lollapalooza took over the Windy City near the end of July and strangled it with frilly, pink skirt ties and iPod headphones.

Hotels were packed. Breakfast diners were packed. There were packed El trains, packed sidewalks and packed convenience stores–all of ’em out of sunscreen. Even at 1am, the lobby of a hotel across the street from the concert grounds was teeming with tour managers on laptops, flustered pizza-delivery guys and bored-looking girls in pajama bottoms (“We’re waiting for Weezer”).

It was 110 degrees in Chicago’s Grant Park, and by some act of God or city ordinance, they had turned on the drinking fountains. A 15-minute-long line of exhausted fans used the free water to soak their shirts, most of which advertised lame old bands like Air Supply, Bob Seger and Foreigner. Since when does the Alternative Nation give enough of a damn about Air Supply to shuck out a week’s paycheck for some faded old shirt? Probably the same time they all decided that $160 was a bargain for two days of sweating in a dry, dusty field and being assaulted by G. Love and Special Sauce.

This year’s lineup offered reunions galore, from Dinosaur Jr. to the inevitable Pixies slogging through the same uninspired set and never talking to the crowd. These are all bands that should have played the first Lollapalooza with Sonic Youth, back when Kurt Cobain was still talking about them in interviews.

The best new bands, at least, descended on the milling throng without pretense or nostalgia. The Arcade Fire stole the weekend, hands down. You’ve heard about this band; be glad that you can actually believe the hype. When was the last time you saw 10 people boundlessly playing dance music with violins and accordions?

The view from the audience was terrible. Everyone and his mother was in front of the Arcade Fire stage, and the band’s members were tiny specks. It didn’t matter. The tiny specks were incredible.

As a perfect aftertaste, Spoon set up across the huge field, joking, “Thanks for coming to our little corner of the world,” and cruised through a stellar session of rock hypnosis-therapy. I wished and wished that they’d make fun of Widespread Panic, playing simultaneously and annoyingly across said field, but, alas, they were too polite. Even the Dandy Warhols failed to make fun of field-mates the Killers, and if you can’t count on Courtney Taylor to mouth off, then I guess you can’t count on anything in this town.

Much has changed since Lollapalooza’s glory days of the early 1990s. Was anyone dancing? No, no one was dancing. Total stage dives: zero. Total number of booths devoted to making the world a better place: just one (“Causapalooza”). Mohawks? None. Everyone stared at the jumbotron instead of the stage.

And yet so much for mellowing out. A girl wearing a T-shirt that shouted “Relax Bitch” had a hard time relaxing. “No! Fuckin’ meet me at the gates!” she yelled into her cell phone, flustered. “I don’t want to watch Ben Kweller!”

And looking out over the festival grounds, empty and dark after Death Cab for Cutie’s sleepy brand of Prozac rock, it became clear that we’re stuck with Lollapalooza. It’s become an institution that the thirty-somethings aren’t willing to let die alongside baggy jeans and Psychefunkapus.

But at least Lollapalooza’s organizers are taking a cue from Chicago’s own Ben Weasel, who once stubbornly suggested that rock bands should stop going on tour and let the fans drive around the country instead. With big-name stationary festivals like Coachella, Bumbershoot and Bonnaroo getting bigger every year, this looks like the future of Lollapalooza, and it’s just as well.

Now only one city’s residents will have to bear the indignity of having $40 “Vote for Perry” T-shirts sold to them each year. Please, Lollapalooza, don’t come West.