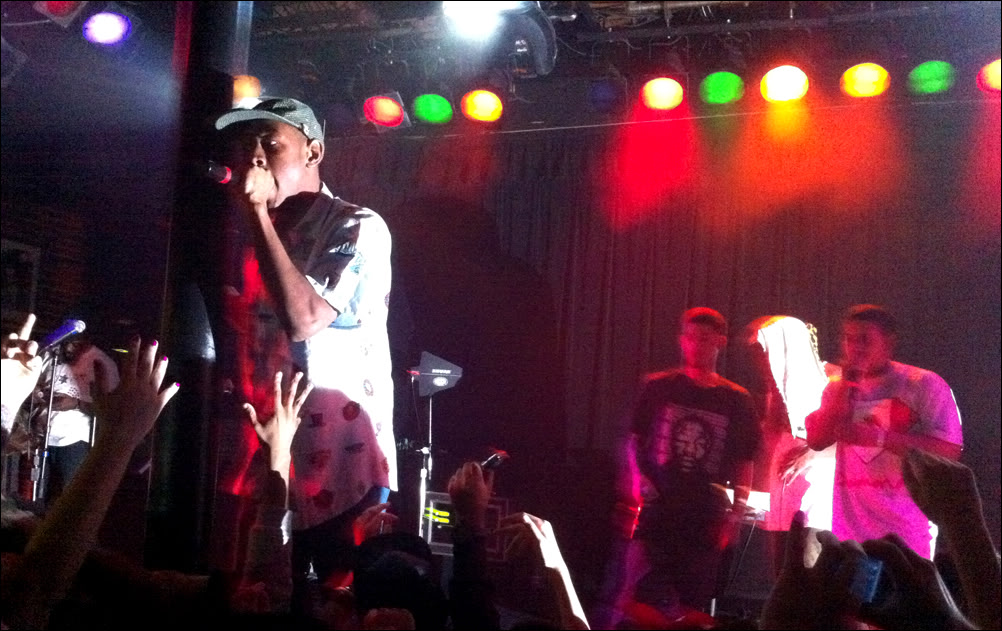 1. Odd Future Wolf Gang Kill Them All are the most punk rock thing in the world right now. Tonight: Constantly stagediving into the crowd. Taunting the audience and berating the soundman. Encouraging the crowd to start mosh pits, even when the music isn’t playing. Middle fingers everywhere. Giving their music away for free, riding skateboards, making their own beats and videos, doing drugs, scaring middle-aged people and not giving a fuck.
2. The show was guaranteed to be crazy, but the fray of human bodies was beyond full effect. Up in front, nobody stood per se as much as swarmed around as one. Falling on each other, arms twisted together, constantly fighting the push and pull from all sides. (Still passing around blunts, amazingly.) This is where I spent the set. I lost 5 pounds, easily.
3. Wearing ski masks with upside-down crucifixes Sharpied on the forehead is a good way to cement your status as the most terrifying thing in hip-hop. Being young helps, because then nobody’s sure whether to take you seriously or not. Do OFWGKTA really want to rape and kill people? a) It doesn’t matter. b) No one knows for certain when you’re under 20.
4. Tyler the Creator and Hodgy Beats are the obvious stars here. Charisma for days. The feeling prevailing: Tyler’s solo album Goblin will come out, he’ll tour with some of the guys from OFWGKTA but steal the show, and it’ll only be a matter of time before he steps out on his own. Hodgy’ll go with him, and maybe Syd and Left Brain. The rest of the guys will all be Inspectah Decks.
5. The mystique of Earl Sweatshirt and his unknown whereabouts are OFWGKTA’s “Jack and Meg are brother and sister.”
6. “I’ve never seen so many people thrown out of a show,” said Jerry, who stood near the door at Slim’s the whole time, “and I saw at least six fights. It was crazy.”
7. Swag | Free Earl | Swag | Fuck Steve Harvey | Swag | Golf Wang | Swag | Wolf Gang | Swag  — Odd Future’s fans know a good chantphrase. And kudos to the people who made face masks of the girl who was staggering in the background during their performance on Fallon. At one point Tyler got decked in the head by Left Brain and doubled over, holding his guts, taking it to Twitter: “Just Threw Up During Show.”
8. Did I mention that being in the front meant fighting for your life? I looked up too late, and lo and behold, a 200-lb. stagediver landed directly on my face. Ouch. Glasses, gone. I dove to the floor. Thank you to the guy who found them. It’s a miracle they’re fine. No bloody nose either.
9. “About halfway through, I had a hard time getting with it,” said Ben, afterwards, “The moral thing kicked in.” I knew what he meant. “But,” I clarified, “it wasn’t a moral thing for me so much as it was a stupidity thing. I mean, ‘This is a brand-new song, it’s called “Bitch Suck Dick”?’ Come on, man. You’re an incredibly creative artist, poised to take over the world. Don’t do that.”
OFWGKTA are talented, and smart, and clever, and thought-out, even when they’re rapping about dumb subjects—their wordplay is incredible. When Tyler delivered “Seven” tonight acapella, the crowd chanting all the words loudly was a beautiful thing. Why? Because it means people are paying attention to language. When he started “Bastard,” all throats screamed. Why? Because it’s an amazing piece of honesty. The set included a brief Earl Sweatshirt homage, via “Earl,” another nonstop singalong, and “Yonkers” and “Sandwitches” were transcendental. (Mike G didn’t fare as well—”Everything That’s Yours” deserves a proper delivery without dropped lines, and his attempt to debut some new solo songs after Tyler had said “Thank you San Francisco, good night” and the gang started leaving the stage was awkward.)
Anyway, there’s shit-tons of energy going on here, and an explosion of ideas scattershot in every direction, and it’s an incredible thing to be part of in a live show, swarmed by other electrified bodies. Lots of talk about OFWGKTA will revolve around their attitude (e.g. tonight: “Oh, did I punch you in the face? Swag.” “All you people in the back can suck my fuckin’ dick.” “I don’t want no fuckin’ Chuck Taylors, I wear fuckin’ Vans, now gimme my shoe back”). But there’s a reason for the unbridled frenzy around the group, and it’s their music. If it sucked, no one would care about them at all.
10. Every time I saw a girl in the crowd I wished I had trophies to hand out for surviving this insane experience.