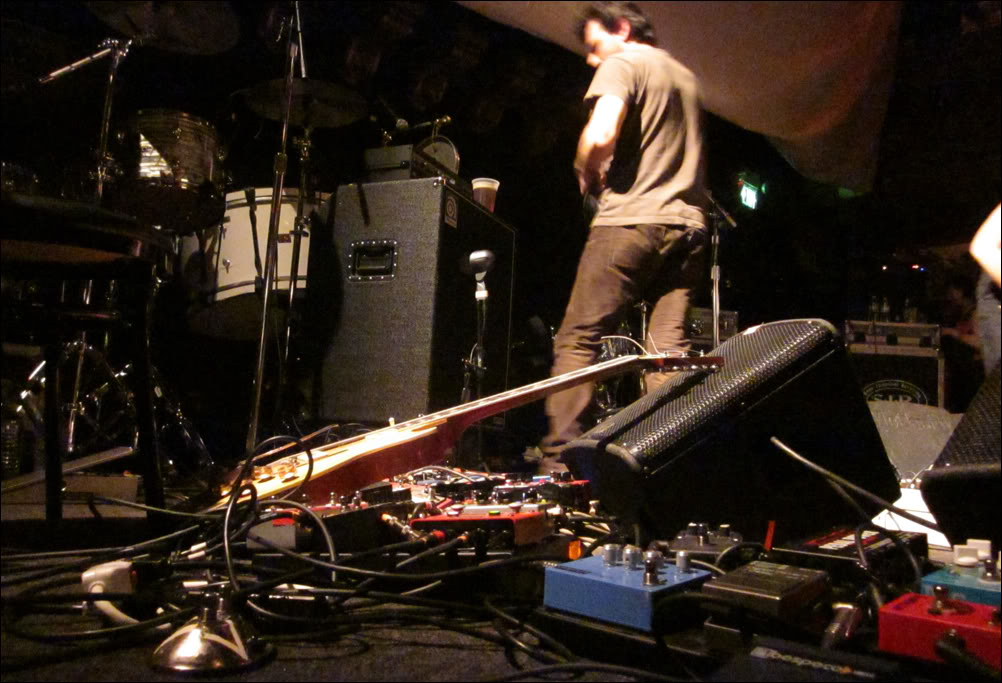 When I think of Godspeed You Black Emperor, I think of that old saying: “Jesus, please save us from your followers.” There’s simply far too many copycat bands in GYBE’s wake. I won’t name names, but you know the ones. “Cinematic, apocalyptic instrumental indie-chamber-rock.” All borne from what Godspeed pioneered, and all owing a great debt to the Montreal collective.
Case in point: We got to the show, and the opening band sounded exactly like Godspeed You Black Emperor, only a little more drenched in distortion. My friend sent me a mocking text: “Sic’est Godspeed cover band EVER!” I invoked Lil’ Wayne lyrics back to dis them. So not wanting to saturate our ears with mimicry before the real thing, we left and got some pizza down the block. We talked about all the bands in the last ten years who copy GYBE, and the mystique of GYBE and how it contributes to their impact—neither of us had ever seen pictures of the band, or watched videos online. And how weird it was that they’d pick a band that sounded exactly like them as an opener.
We came back and the opening band was still playing. But they sounded better. They sounded really tight, and really pro. They actually sounded a lot like Godspeed You Black Emperor. My friend looked up some pictures of the opening band on his phone. They didn’t look like the people on stage at all.
And then it hit us.
The band on stage was Godspeed You Black Emperor all along.
We. Felt. So. Stupid. Admittedly, this is an embarrassing story to tell. But it perfectly underscores just how far-reaching the band’s influence is, that we—fans of the band!—would mistake them for one of their many wannabes; or how much of a struggle it must be for Godspeed, when premiering new material, to not sound like a caricature of themselves. We’d never seen pictures of them. How could we know?
Luckily, we only missed a couple songs on our pizza jaunt, and the rest of the two-hour set was incredible.
It was very, very quiet between songs. So much that we could hear the film projector loud and clear, whirring along in the balcony. And the film projections themselves: Train tracks. Stock tickers. Bulbous illustrations. Burning buildings. Signs reading “The End is at Hand” and “Preemptive War is Terrorism.” These things make me feel better in believing in Godspeed’s music, much like the diagram on Yanqui U.X.O. outlining connections between corporations, record companies and the military-industrial complex. At the merch table, they sold anarchist literature. They also sold shirts that didn’t have “Godspeed You Black Emperor” printed on them at all, but rather a series of phrases, including “God’s Pee.” A sense of humor, these ones.
They ended the set with an unreal version of “Blaise Bailey Finnegan III,” from Slow Riot for a Zero Canada, which concerns a man in court, arguing about a speeding ticket. Ironically, while driving home, my mind abuzz from the excitement of finally seeing Godspeed You Black Emperor after missing them 10 years ago, and still confused from mistaking them for an opening band, my foot got a little heavy. The red lights appeared in my rear view mirror at about 1am. I looked at my speedometer—80mph. Whoops. No talking my way out of that one.