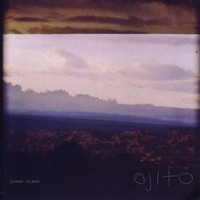 The crowd was hushed and somber as we entered the Sebastopol Center for the Arts. Joni Davis sat at a piano, her voice washing over the audience like a piece of warm red velvet, as she swooped through the last song of the Reverent Sister’s set, a new project made up of Davis and Faun Fables’ Dawn McCarthy. Definitely an act worth getting to the show on time to see,  which I unfortunately did not. Hopefully they will be around these parts again sometime soon!

After a short break, we took our seats before a stage that resembled a child’s playroom. A Fisher Price pull-a-tune toy, tiny handmade guitar, sticks, rocks, a pink plastic microphone, an old record player and a vinyl copy of “Solitudes,” are just a few of  the artifacts that surrounded local composer Jesse Olsen as he sank into a set of songs inspired by and recorded during a year-long sojourn in the high desert of New Mexico.

The high desert is a notoriously elusive environment to capture in tangible form. Thomas Merton, Georgia O’ Keefe, N. Scott Momaday and Sherwin Bitsue are only a short lists of artists, poets and writers who have attempted to encapsulate the mythical/mystical sensation of that landscape.

Olsen’s artistic interpretation, described as “fragmented songs, minimalist soundscapes, and lo-fi tape experiments,” is an intriguing addition to that canon. A bit Gastr del Sol at moments, the thoughtful jerky turns of expression, the playful interaction between words and silence made for a thought-provoking and emotional night of music. Alternating between guitar, casio keyboard and music-box, Olsen played sweet little bubbles of pop loveliness like the song “Snow Day” and followed them with forays into meandering repetitive lullabies, odes to desert sunsets and studies of the interplay between silence and expression. On “Riperian Habitat,” he sang about “relaxing into the cottonwood and sage,” later singing “I would be substance,” with the ethereal yearning that long stays in the desert seem to inspire, as one truly begins to feel the reality of being a tiny speck in a humongous universe.

Later in the set, Olsen was joined by Peter Bergquist, Maxwell Church and Ben Gustin, for rollicking songs like “Buckeye Jim,” which could have been taken straight from a late nineties Will Oldham album, all galluping fun country rock sing-a-long. The addition of mandolin, piano, and horn to the set added a welcome liveliness, a reminder that even in a sparse landscape, life still breathes and pulses.

By the end of the night, the floor was littered with the children’s toys, microphones, sticks, musicbox, cotton cloth and even a pair of socks that the barefoot Olsen discarded early in the set. There is a sense of catharsis in the crowd, as though we have all been on a journey into another place, and now back, we are surrounded by the collected detritus of the trip. It is a lovely feeling, a reminder of the ancient existentialism of certain environments, the strange hope that comes from realizing that in the scheme of it all, we are nothing but a collection of socks and sticks.