.Live Review: EMA at the Independent 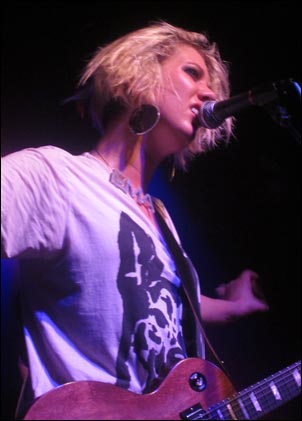 EMA is Erika M. Anderson, a singer originally from South Dakota who’s made a fantastic record this year, Past Life Martyred Saints; who serves as a hypotenuse in an imaginary triangle involving Patti Smith and PJ Harvey; and whose presence on stage calls to mind punk shows at Cafe This in 1994, or the X-Ray Cafe in 1995, or Kommotion in 1996.
This is entirely welcome, and not solely from a nostalgic DIY standpoint. In a no-longer-truly-indie landscape rife with processed performers who sign on with someone else’s pre-approved idea of what’s “in,” something as honest and from-the-gut as EMA is refreshing as fuck.
Maybe the ennui is true, to an extent. I miss awkward, unrefined bands with too much to say, and tend to prefer them to slick, stylized bands with nothing to say. Or, as Anderson herself said once of Past Life Martyred Saints, “With this record, the thing that felt controversial was injecting emotion into ideas, not the other way around.” In other words: everyone knows a brain that tries to rule the human heart is foolish, yet it’s accepted as smart. And why?
EMA took the stage with “Marked,” with gyrating hips and hair in her eyes. Amidst tumbling through a Violent Femmes cover (“Add it Up”; kudos to Leif Shackelford for tackling Brian Richie’s tumbling bass lines on a violin) and “Cherylee,” a moving solo number from her former band Gowns, she played just about every song from her new record, including the great “California.” Some of them extended into loose noise jams, some were plain and taut, but all were full of the honest, raw spirit of the heart.
When singing, Anderson is led by some other force—last night, she kicked, jumped, fell onto her back, tucked the mic in her pants, let the audience play her guitar, wrapped a cord around her neck—but between songs, she’s down to earth, which is to say unpredictable, which is to say human. She could motion gratefully to the crowd, and say “Thanks for bringing back the joy in me,” or she could lead an impromptu sing-along of the Femmes’ “American Music,” or she could curse her guitar, spitting out, “Stupid guitar. Stupid instrument. Stupid rock.” You just never know.
Afterward, the band hopped off the stage and sold their own shirts at the merch stand, and though the place had only been little more than half full, the show was unforgettable. Here’s to more like her.