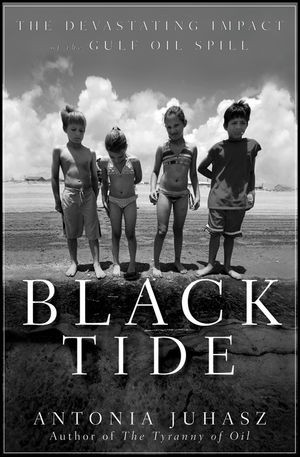 Last April, Antonia Juhasz, author of Black Tide: The Devastating Impact of the Gulf Oil Spill, traveled to London where she spoke critically about British Petroleum at the corporation’s annual shareholder meeting. She was accompanied by five representatives from the United States, including the head of the Louisiana Shrimper’s Association.

“We still have waves that roll in and oil rolls in with it. We stick a stick in the sand and there’s still oil there,” Juhasz told members of an audience that included the CEO and the Board of Directors of British Petroleum. Health and environmental provisions promised by BP still have not surfaced, more than a year after the horrendous 210 million gallons of oil spilled into the Gulf of Mexico after the explosion of the Deepwater Horizon oil rig, Juhasz told Democracy Now last spring. This is a serious, ongoing and devastating disaster in the Gulf Coast region, the director of Global Exchange argues in Black Tide. Her book details the ongoing mess and lack of accountability by federal and corporate entities that continues to decimate an already devastated region. See Antonia Juhasz speak about the very real possibility that disaster on the magnitude of the Gulf Oil Spill will happen again on Tuesday, Oct. 18 at the Community Church of Sebastopol. 1000 Hwy 116, Sebastopol. 7pm. 707.575.8902.