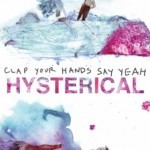 Proving their triumphant Outside Lands performance was no fluke, the Brooklyn/Philly quintet return with their strongest melodies and most danceable songs since their beloved 2004 debut. This is a welcome change after 2007’s disappointing Some Loud Thunder, where frontman Alec Ounsworth and the boys seemed embarrassed of their gift for bouncy pop-rock gems, shrouding the songs in bad reverb and fake lo-fi aesthetics – a clear reaction to their shimmering/scintillating debut. Throughout Hysterical, Ounsworth’s voice sounds less nasally and more impassioned with a hint of desperation, adding inherent high drama to most songs, especially the title track and “Ketamine and Ecstatcu”, which sounds like a lost Echo and the Bunnymen tune. Not much musical variation except for the orchestral-acoustic curiosity “In A Motel”, but that’s what the next record is for. For now, it’s good to see such a promising group with their mojo back. Here’s me clapping my hands and saying yeah.

While Nirvana’s seminal 1991 classic is certainly worthy of the industry’s now-all-too-common “deluxe edition” treatment, this release suffers from the ubiquity of the bonus material in various official and unofficial releases. 1990’s “The Smart Studio Sessions” and 1991’s Seattle Halloween show have been mined endlessly by fans since the band’s abrupt 1994 demise. The “boombox rehearsal demos” are mildly intriguing, yet too grating to appeal to non-fanatics. Best of the Super Deluxe Edition are Butch Vig’s rough “Devonshire Mixes” (the tracks before Andy Wallace’s mixing), which offer a slightly edgier take on the album to partly appease those turned off by the original mix’s polish. The original album itself is just as catchy and rocking as ever, so your best bet is the 2CD deluxe edition (which includes all the original b-sides).

Most essential of all is the Live at the Paramount DVD, which presents video of their full Halloween ’91 theater show for the first time ever. It’s thrilling to see the power trio on their last tour of small venues, just before platinum status (especially for those who missed their SF show at the Warfield five days before this was filmed). With a sparse stage design comprised of a single solid color behind the group and a few searchlights, Nirvana’s performance stands on its own, justifying all that hype two decades ago.

This New Jersey quartet’s 2009 eponymous debut was full of wistful, care-free jangle pop tunes that reminded the garden state has just as many gangly undergrads as guido juiceheads. On Days, the band repeats the formula for the most part, again providing a droning, Velvets-y beach day alternative to Jack Johnson. “Municipality” is one of the only selections with any noticeable variation, with its slightly more complex structure and subtly mournful guitar riff and piano accompaniment.

Singer-guitarist Martin Courtney seems aware of this on “Younger Than Yesterday”, which also features a welcome touch of musical progression/dynamics. “It took me all summer long, just to write one simple song,” he sings, “there’s too much to focus on, clearly there’s something wrong.”

This album is a slight letdown after two years, but the world can always use a good dream-pop band, and Real Estate does it well. They’re still a band to watch (for now), but they need to realize that summer just ended.

Director Dave Markey’s ramshackle super-8 chronicle of Sonic Youth’s 1991 UK tour gets the remaster treatment for its 20th anniversary DVD release, but it’s hard to tell since it retains its half-charming/half-frustrating grainy punk aesthetic. On second viewing, one wishes for more traditional, clear footage of the Goo-era performances, but the film still serves its original purpose as a glimpse at Nirvana right before superstardom and the rest of the college/alternative rock scene (Sonic Youth, Dinosaur Jr., etc.) on the cusp of the impending media spotlight. The highlight of the extras is a Q & A session with Markey, Sonic Youth and J. Mascis from a 2011 screening in which we finally learn the hair-metal origins of the film’s title.

After 2009’s Wilco (the Album) saw the group rebounding from its wholly bland predecessor Sky Blue Sky, healthy expectations were at least back (if not exactly high) for their next album. Like The Album, The Whole Love is a mixed bag that shows off the Chicago group’s various mastered guises, from country balladeers to kraut-rock groovesters and rootsy American rockers. And while the up-tempo numbers are enjoyable (especially the organ-driven clap-fest “Standing O”), the lasting impressions are born of the softer numbers such as the Beatle-esque “Sunloathe”. One highlight is the gorgeous “Black Moon”, an Elliot Smith sound-alike that ends with a stirring orchestral accompaniment never before heard on a Wilco record.

Stylistically, The Whole Love sounds at first like 1999’s Summerteeth, but these new songs’ immersion in lushness and strings (without the usual tension and dark undercurrent) is something new for the group. Jeff Tweedy and crew inhabit the ballads deeper than before, which is as worthy a use of the players as the quirky rockers and extended jam fodder. The 12-minute closer “One Sunday Morning (Song For Jane Smiley’s Boyfriend)” is a haunting, whispered acoustic guitar/piano number that features Tweedy’s most intriguing lyrics in years. It’s the best song on the album and a positive sign that we may eventually get Tweedy’s very own Nebraska. Hopefully the next Wilco album will pick up where this track leaves off.

Next ArticleTalking With Elected Officials at Occupy Santa Rosa