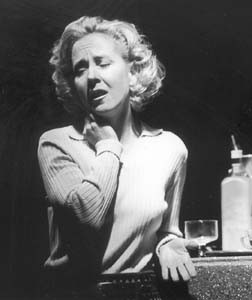 FOR BETTER or worse, the dawning of the atomic age shepherded sci-fi pen-pushers into a brave new world of “weird menace.” Even the most improbable organisms, when exposed to an atomic event, became pledges for the mayhem club. Maverick horror-schlock filmmaker Roger Corman was hip to this phenomenon and with characteristic irreverence chose a plant as the unlikely villain of his classic 1960 film Little Shop of Horrors.

Musical theater mirrors this fabled atomic augmentation: Take the most unfathomable subject or source work, radiate it with near-lethal doses of kitsch and camp, and watch it devour New York. It’s a wonderful formula that worked well as a musical, and River Repertory Theater’s able cast takes it to the stage again with great success.

Seymour (Tim Dickinson) is a bush-league botanist desperate to extricate his roots from a decrepit skid-row florist shop. The bespectacled nebbish strikes a Faustian deal with a speaking, carnivorous plant that allows Seymour to achieve fame, fortune, and the affection of shop-girl Audrey (in a strong performance by Kathleen Nordby), but only as long as he sustains the plant’s regimen of human flesh.

As the reigning monarch of the vegetable kingdom, plant puppeteer Morgan Wilson and singer Michael Fisher forge a topnotch collaboration of movement and soulful crooning. As often as the duo steals the show, however, Dickinson and Nordby steal it back, especially during their sterling “Suddenly Seymour” duet.

River Repertory Theater’s Little Shoppe of Horrors is a joyous romp–edgy musical theater sweetened with a generous dollop of hinterland unpretentiousness. It is an unpruned and prickly pleasure.

Set in mid-’80s Manhattan, Blue Window finds the neurotic Libby (in a tiptop performance by Danielle Cain) at the chaotic center of her first dinner party. The guest list is a medley of off-kilter souls acquainted with Libby through the various tributaries of metropolitan living–from shared apartment buildings to group therapy.

Libby inadvertently rips the cap off her front tooth while prying open a jar, and from then on the hostess avoids conversation lest she reveal the broken dental hardware. Undaunted, Greiver, an aspiring actor (in a divine performance by Ken Griffin), competes with lumpy Norbert (Matt Strong) for their hostess’ attention. Writer Alice (Joan Feliciano) and her lover, family therapist Boo (Sheri Lee Miller), wage subtle verbal war with each other.

In short, there is no plot, just an amicable assemblage of emotional baggage constantly rearranged on stage in new and alluring patterns.

The AT ensemble does so well with Lucas’ wonderfully conversational dialogue that it is hard to resist joining in the patter. It really feels like a dinner party. Likewise, Griffin so effortlessly emits realism as the starstruck narcissist that it seems conceivable that his character’s pithy one-liners are actually the player’s own off-the-cuff commentary. During the play’s “before” and “after” sequences, the stage functions like a multidimensional fishbowl in which the audience is privy to the private lives of all the characters simultaneously. Indeed, the whole play allows us to peer through the windows of a very interesting household.