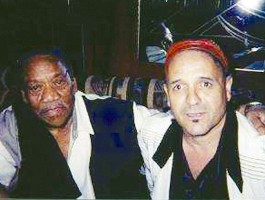 Little Help from his Friends

Since there are no gigs that include medical coverage, musicians must do it for one another. Ron Thompson, one of Northern California’s top blues guitarists for the past 30 years, is recuperating from a life-threatening ordeal with pneumonia in February. Speaking by phone from his Hayward home, he assures that he’s “doin’ all right,” and performing on a limited basis. The only problem is the stack of medical bills on his desk.

To help him get back on his feet, the Last Day Saloon this weekend hosts “Musicians Rally for Ron Thompson” with a dream lineup of local blues performers: Volker Strifler, Michael Barclay, Levi Lloyd, Bill Noteman and the Rockets, Joel Rudinow, Sly and Derek from the Aces, the Blues Burners, the Blues Defenders and Brother Cat.

Thompson, born in Oakland in 1953 and pictured above with Bobby Bland, has played every dusty dive, back-alley bar and county fair between Fresno and San Francisco. He began his career playing in a North Richmond club at age 18, where he gained the notice of and was hired by Little Joe Blue. During the mid-’70s, Thompson became John Lee Hooker’s bandleader and made records with Big Mama Thornton. (“I might be able to find them if I searched for about three days,” he says.) In Chicago, he met Eddie Taylor, Jimmy Reed’s guitarist. “Taylor liked my amp, I got to know him, that’s how I hooked up with Reed.”

The next decade found him joining close friend Mick Fleetwood’s band, Blue Whale, and starting his own group, Ron Thompson and the Resistors, whose album Resistor Twister garnered a 1986 Grammy nomination. Recently, Thompson has been getting even more recognition. Mayor Gavin Newsom declared Sept. 5, 2007 Ron Thompson Day in San Francisco. Several other cities, including San Jose, followed suit. The National Heritage Foundation Blues Hall of Fame inducted him in 2008.

Thompson also plays a mean piano and mandolin, “depending on the kind of song I’m doin’,” he says, “but slide guitar is what I really like. Elmore James got me really goin’.” He hopes to be well enough to come to Santa Rosa for the show. “I still get really tired, but I want to be there,” he says. “Music is what I do for a living. I’m blessed to be able to make money playing music.”