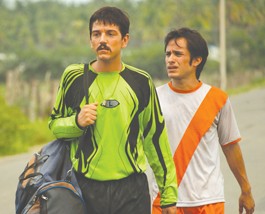 Two siblings get all money can buy in 'Rudo y Cursi'

Even with the severely glutted film market, I wish we got three times as many films from Mexico as actually arrive here. Rudo y Cursi will certainly do for now. It is produced by some of the most revered names in new Mexican cinema (Guillermo del Toro, Alfonso Cuaron and Alejandro Gonzalez Iñárritu) and directed by Cuaron’s brother, Carlos. The film reteams Diego Luna and the criminally handsome Gael Garcia Bernal of Alfonso Cuaron’s Y Tu Mamá También.

Like También, the action is narrated, but the difference is in the approach. The narrator in the former was detached, Godardian. In Rudo y Cursi, the narrator is Batuta, “Baton” (Guillermo Francella), who is full of charming fatalistic proverbs about the relation between soccer and life. Baton is essentially a trickster figure, with dyed whiskers and a sports car. Like the devil, Baton looks for mischief where he can find it—and he finds it on a rural soccer field.

Baton discovers Tato (Bernal) and Beto (Luna), who are apparently half-brothers, (some of the U.S. reviews are calling them brothers). The two are classic hijos de chingada, and their parentage is a little uncertain, though each boasts of the superior virtues of his long-gone father. It hardly matters, because their mutual mother’s latest boyfriend is a repulsive cop. The guys work on a banana plantation and are both about to run away to the United States.

The talent scout Baton sees their promise on the field, but figures he can only take one of the pair. That one is Tato, who figures that futbol is just his day job until he can make a fortune as a cowboy-suited accordion player. In Mexico City, Tato rises to the top of the game, and he pressures Baton to sign Beto as a goalie. Beto is a success, ruling the goal posts and shutting out team after team. Unfortunately, his poor sportsmanship gets him the nickname “Rudo.”

For a time the two do well. Tato, now with his own nickname, “Cursi,” meaning “snotty,” gets involved with the wet-dream TV starlet Maya (Jessica Mas). Tato also lands H-2, a fine house and even a few gigs, where he repeatedly massacres Cheap Trick’s “I Want You to Want Me.” But Beto’s degenerate gambling and Tato’s hopeless love for the no-good Maya change both their luck for the worse.

I’m not sure why the subtitles translate Baton’s words into cockney slang; this may have been to please the British market, due to the widely held belief that North Americans don’t care about soccer. (Or maybe it’s to make Baton sound more like Honest John Foulfellow in Pinocchio.) To be fair, this is an extremely idiom-heavy movie.

Rudo y Cursi takes a merry tone to a story in which all roads lead to failure. Ultimately, the one true success is a local narco-thug with an army of bodyguards; he helps himself to the only peaceful spot in the film, a beautiful local beach and he’s a diabolus ex machina who brings in a sort of unhappy-happy ending. Yet it’s troubling to suspect that Rudo Y Cursi is really at heart a cautionary tale of two rural bumpkins who rise above their station. Because of that slight patronization, Rudo y Cursi is only almost really funny and only almost really tragic, though always thoroughly and elegantly moral: “Pity, nowadays, wars are mistaken for games and games are mistaken for wars.”

Baa to the Bone