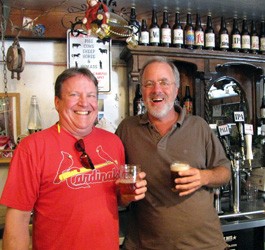 A little black-eyed dog frequently turns up at events all over the North Bay. The dog shows up at school fundraisers, backyard concerts, local theaters, festivals and art auctions. It shows up at student filmmaker parties and events for the Boys and Girls Club. The dog has strayed out of state and across the country to national events held by the Rotary Club, Active 20-30 Club and the Leukemia and Lymphoma Society. It has even ridden with bike messengers in New York City.

The stray has a collar, but no name and no body. He very rarely talks, but his actions speak louder than his bark anyway. He is, of course, the face of Petaluma’s Lagunitas Brewery. Their beer is found at hundreds, perhaps thousands of events each year, helping to support the arts and other community needs, and for this we honor Lagunitas this year with a Boho Award.

When asked how much of the approximately 100,000 barrels of beer made each year the company donates, owner Tony Magee shakes his head modestly. “We don’t want to make too much of it. All these events could ask anybody, and they asked me. They chose us and our beer. We always say, ‘Thanks for inviting us. We’ll be there in spirits.'”

Chief marketing officer Ron Lindenbusch concurs. “From day one we realized it was a great way to be part of the community, especially since times have gotten much harder for nonprofits. As we’ve grown as a company, we’ve been able to step up and offer even more. We have yet to say no. We hear about certain things, like the Cloverdale Fiddle Festival, which recently was having a hard time and was going to pull the plug. So we’re donating money and some time and effort to resurrect that and keep it alive. But for the most part in the Bay Area as a whole, we’ve dialed into the community in a special way by letting beer speak for us. And beer turns into money for nonprofits right before their eyes.”

Seemingly shy yet an engaging storyteller, Magee alternately paces and plays a small guitar from the Goodwill while speaking. A Chicago native, Magee is a blend of musician and design-school dropout, and previously worked as a printing contractor with clients like Bank of America and Visa. Unhappy with a career that took thousands of trees to produce a paycheck, Magee started making beer after his brother gave him a home-brew kit for Christmas in 1992. “It was like a seizure,” he recalls. “I brewed one batch, then five batches, then 30 batches, then said, ‘I’m in.'”

From February to December of ’93, he went from brewing his first batch to getting his brewing license. Wanting to do something that would “leave a mark on the landscape,” Magee realized he could make a brand that had a voice. “I wasn’t a schooled brewer so, by definition, I made different beers,” he says. “So when it came to brands, I was going to break rules. I did things differently than traditional brewers did. Nobody at the time put stories on the sides of their labels. We didn’t make traditional-style beers; we just made Lagunitas-style beers. I thought we’d be our own little band with our own sound.”

Now his “little band” of employees numbers around 70 and the brewery has moved off his stove in West Marin to a large production facility and beer sanctuary/party palace in Petaluma.

“The nonprofits are not professional organizations,” Magee says. “They’re just people with kids in schools or Boys and Girls Clubs. These are the most selfless folks who take perfectly good couch time and they go out and give their time. I think they see us the same way. We don’t expect a speech. What we’re saying is that the things you care about, we care about. It’s good to have friends.”

Next ArticleSept. 29-Oct. 6: Across the Bridge