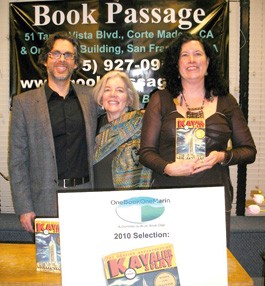 Book Passage is as independent as the authors it nurtures

If it weren’t for the existence of bookstores, most of the world’s published authors, no matter how brilliant their prose and poetic their voices, would have a much harder time getting those words in front of readers. This is especially true of authors with unique visions, obscure topics or difficult-to-define styles. Over the last few decades, hushed rumors have been multiplying, all predicting the imminent demise of the independent authorial voice. Fears have abounded, worrying that big-chain bookstores, long threatening to dominate the bookselling market, will soon decide what books are most profitable, thereby controlling which books are allowed to be published.

Standing against such forces, as verdant and welcoming as a leafy green island in a sea of salty sameness, Elaine Petrocelli’s beloved Book Passage stores (the original in Corte Madera, the other in San Francisco) have for years been championing the works of Bay Area authors. Petrocelli and her husband, Bill, opened their first store in 1976, a logical evolution following a decade of selling travel books through a successful mail order business headquartered in San Francisco.

The opening of that store in Corte Madera was just the beginning, with a string of milestones to follow. Today, Book Passage is known as the place where you might see Isabel Allende having tea in the cafe, where Anne Lamott hosts legendary book events, where people like Jimmy Carter insist on holding their Northern California book signings.

“We respect authors,” says Petrocelli, Book Passage president. “The people who write books spend years writing them, so it’s always something to celebrate every time a new book is published. We try hard to feature as many wonderful authors as possible.”

“Sheldon came through our mystery conference years ago,” Petrocelli says, “and now has had seven bestsellers. While we can’t say that all authors who develop their craft here go on to be bestselling writers, I can say that many professional writers have said that the things they’ve learned through our conferences and classes have been invaluable.”

It’s no secret that authors who come up through Book Passage’s workshops have a small edge on other authors looking for stores to host readings of first books.

“We can’t host everyone, as much as we’d like to,” Petrocelli says. “But we do tend to give preference to the people who come through our classes—because we know them.”

According to Petrocelli, Book Passage has benefited from being located in one of the most vibrant bookselling areas in the country. And in return for the community’s support, Book Passage does much to support the community. They have an in-house used bookstore, the proceeds from which benefit Hospice of Marin. They are a huge benefactor of local literacy programs and regularly contribute to fundraising events. It’s little enough, Petrocelli claims, given how faithful Marin County readers and writers have been.

“Locals may be tech-savvy,” she says, “and know all about purchasing on the internet, but they also know that if they want to meet authors in person, to hear first-hand about the experiences of these amazing writers, then they have to support their independent bookseller.

“I’m sure,” Petrocelli continues, “because of the people who live in the North Bay, that we could not do what we do anywhere else but here.”