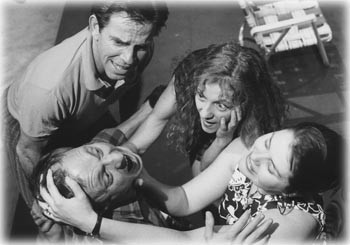 Melee: The cast of ‘Lips Together, Teeth Apart’ get physical.

‘Lips Together’ has a howl locked inside

THIS IS NOT MULTIPLE-CHOICE. You must select all: Each of us carry around terrible secrets having to do with homophobia, racism, self-hatred, illness, and sexuality; none of us ever tells the truth no matter how much we speak, not only because we can’t, but because everyone else’s monologues are so loud that they can’t hear the truth unless it’s arm-broken into them; the life force itself is best exemplified by a ditzy hausfrau with a penchant for Little Theater; and those with secret angsts, artistic bents, and high intellect die deaths every moment.

Furthermore, in essay style: Should you tell your secrets, even to your spouse? Is the fiber of our skeletal souls really as brittle and sharply poised to shatter as playwright Terrence McNally suggests in his Lips Together, Teeth Apart, presented through Oct. 25 by the Sonoma County Repertory Theatre?

Quiz over, cheer up. It’s a typical Fourth of July weekend on Fire Island, New York’s popular gay resort, but no one, save the homosexual neighbors, is gay–as in happy. Yes, the neighbors: nice gay men who are being mowed down by plague, who have cocktails and civilized conversation, and who salute the country, but are kept offstage, invisible, and voiceless.

Sally (Terra Shelman) and Sam (Xavier Lavoipierre) inherit a seaside home when Sally’s brother dies from AIDS. They’ve foolishly invited Sam’s sister Chloe (played on the mark by CoCo Tanner-Boylan) and her husband, John (Scott Phillips), to join them. Foolishly, because Chloe drives everyone mad with her ceaseless chatter, and because Sally and John have foolishly once shared a bed.

We know from the first overly loud moments of this production–directed with much wit and insight by SCRT executive director Jim dePriest, who was unfortunately unable to modulate the volume of his cast–that this is a weekend doomed to familiar familial failure.

Here’s the extra credit: This is a comedy, and a damn funny one.

The humor hangs on the writing, the direction, and Tanner-Boylan’s remarkable timing as a character who must at one point say, “I dredge everything up sooner or later; I’m a walking nerve end.” And to this end, with her trilling bad French, quick hurts, and very palpable humanity, Tanner-Boylan’s Chloe touches the nerves of every cast and audience member in the house.

Lavoipierre’s Sam begins too loud and just gets louder, and never for a minute does it seem plausible that he could be married to the waifish, artistic character played by Shelman. He engenders empathy, but can’t recoup control from a start of such stress. Phillips is gorgeously modulated as an effete schoolmaster until he reaches a testosterone-driven boiling point of sexual rage, one of the most terrifying acts of violence I’ve ever seen on the stage.

This is a fine production, one that received a standing ovation on opening night. The costumes, designed by Cirkl Piper, make Tanner-Boylan a palette gone crazy, but Shelman remains dressed in the same black for the whole evening: a widow.

A dark play with dark, rather facile ideas, Lips Together ends with the stage bathed not in black, but in streaming light as the characters face the night sky to witness a shooting star. Another soul is gone.