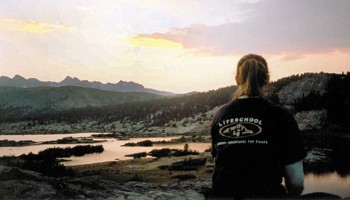 With cell phones, video games, cable television, and Internet chat rooms, kids are faced with an abundance of information that’s screaming to get their attention. Reality is digitized, pixelated, prescanned, and revamped from the moment the radio alarm first goes off in the morning to the last instant message sent before shutting down the iMac and going to bed.

Lifeschool, an outdoor-education program in Bodega, aims not to change that but to counter it by shortening the distance modern life puts between kids and the real, hands-on world. Instead of the global online world, Lifeschool puts Bay Area kids into the wilderness on backcountry outings ranging from three-day field trips to 12-day summer odysseys. The mission is to provide kids with life skills that apply just as much in suburbia as they do in the wilderness.

That’s the plan, anyway. As a small nonprofit that’s not even two years old, Lifeschool has its own challenges to meet, and most of those have to do with fundraising. But the program itself is strong, built on a dedication and enthusiasm to match the staffs’ experience and training.

There’s no Camp Lifeschool, however–no mess halls or cabins. “It’s not a camp because the backcountry’s the facility, or the white-water raft, or the tent,” says Jim Nevill, cofounder and executive director of Lifeschool.

There are other organizations that offer backpacking-oriented programs for youth, such as Outward Bound and National Outdoor Leadership School, but those are geared more toward wilderness survival skills and aren’t open to kids under the age of 15, before they are at least freshmen in high school.

“There are no programs that are readily accessible for 12-, 13-, 14-year-oldkids,” says Nevill, who has worked in many different youth settings as a ropes course facilitator, a naturalist leading day hikes, a camp counselor, a childcare coordinator in a social work context, and in wilderness therapy. “What’s innovative about Lifeschool is that we start with 12-year-olds, so we work with sixth graders.”

Despite the outdoor setting, Lifeschool’s main focus is on overcoming personal obstacles rather than rugged natural ones like craggy precipices or class four rapids. “Lifeschool’s not a technical school,” Nevill asserts. “They’re going to get to do pretty adventurous rock climbing, but they’re not going to have ice axes. It’s fundamentals, learning the basic skills. You can go to Lake Tahoe, [just] five miles back, and really powerful things will change your life.”

Tromping around the backcountry with a half-dozen preteens may sound to some like a disaster in the waiting, but the case is surprisingly opposite once kids adjust to the markedly slower pace of life. “Kids know how to take care of themselves,” says Nevill. “It’s kind of a misconception of adults that we need to constantly tell them things and take care of them.”

Sherry Courter of Glen Ellen thought Lifeschool would be a great experience for her daughter, Sara, who, she says, is “attached to my hip.” Sara, who was 13 at the time, went on a six-day Lifeschool trip to Emigrant Gap last summer. “She’s outgoing, very friendly, but she does not like to be away from me,” Courter says. “A lot of it has to do with technology–[it] can get ahold of you at the drop of a hat. I thought she needed to do something where she could learn to take care of herself and build some confidence.”

It’s that kind of lesson that Lifeschool aims for, Nevill says. “It’s less content–ecology and biology–and more context: believing in yourself, learning to communicate in a team. And you learn it through the biggest classroom in the world: the earth. The kids are their own teachers. As mentors, we facilitate and ask a lot of questions. We don’t do a lot of telling.

“What I love about kids and nature,” adds Nevill, “is they can figure it out themselves if you sit back and let them stay safe. We brought kids to Point Reyes. They found a tennis ball and played catch. Then they made sand castles. After that they played water tag with the ocean. Kids are closer to nature than we are. They see a beach and their eyes open wide and they think, ‘I could find 20 different ways of having fun in this scenario.’ It’s a gift to be around the kids’ energy for that reason.”

A Lifeschool trip, however, is not necessarily a dilly-dally in the state park. “It’s not that easy,” Nevill admits. “It’s a huge deal for lots of kids. It’s not boot camp; we don’t have any mileage quota. It’s more like, what does the group need? We’ve had trips that go a total of eight miles in five days, and this summer we had a six-day backpack trip and we did 30 miles.” The mantra is that a group will only be as fast as its slowest hiker. “If a group is moving at different paces, they sit down and have a team meeting. It’s an exercise in negotiating and resolution.”

The physical challenges of being in the wilderness with a heavy backpack may push kids a bit out of their comfort zone, but the best learning–the kind that sticks with you–happens out of the comfort zone. “Sara got so absorbed in surviving in the wilderness, and when she came back, she came back a different child,” Courter says. “She has a lot more confidence because she survived it. She couldn’t get over how she spent two-thirds of the trip pining for me, and when she got home, she was pining to go back.”

Overcoming personal barriers once makes an impact on a kid, but repeating such experiences makes an even greater impact. That’s why Lifeschool offers year-round programs, the goal being to get kids to take part in a three-day trip in the fall, then return for trips with their class, and in the summertime take backpacking trips. Trips are always in small group settings with six to eight kids and with a staff-to-kid ratio of 1 to 3. “That’s when you create impact with kids, on a personal, one-on-one level,” says Nevill.

Trip leaders don’t just lead a group, they become part of the group and thus are closely tuned to the group’s needs. “The guides are incredible,” Courter says. “They’re really good about letting the kids have a little bit of a vacation experience. They don’t have to get up at the crack of dawn and work all day. The kids are very much involved in making decisions, and they have to work through problem solving when they run into problems.”

Nevill relates such a trip to the Ansel Adams Wilderness in the High Sierra last summer. “We had some really strong hikers, and we had a kid who’s probably walked around the block once in his life. Some wanted to charge the biggest peak, and the other kids were like, ‘I want to stay here and swim all day and write in my journal and take naps.’

“We thought the group couldn’t handle going to 13,000 feet,” Nevill continues. “We all sat down and had a meeting, and the kids wanted to charge it. And we thought, ‘OK, it’s going to be safe enough, and the kids want to do it.’ It’s important to let kids make decisions and choose their course.”

Lifeschool enrollment went up 400 percent this year. To get more kids involved, Lifeschool is making a push to establish relationships with area schools and youth groups. A spring break outing to Death Valley is planned for sixth graders from San Rafael’s Miller Creek Middle School, and Brookhaven Middle School in Sebastopol has been considering doing a trip.

As for Sara, she came back from Emigrant Gap wanting to sign up for another trip this summer. “Five of them stayed in touch–the kids are all on e-mail together,” her mother says. Sherry and Sara attended a Lifeschool reunion picnic in October, where Sara exchanged pictures with her new friends. “The experience created a lifetime bond with these kids in just six days. That’s something they don’t normally get at that age.”

Lifeschool may take place in the wilderness, but it’s as much about discovering things inside yourself as it is about the world outside. “Lifeschool is not wilderness therapy–it’s about learning how to be in the world,” stresses Nevill.

If kids can face the unique obstacles of backcountry living and make it home to tell Mom and Dad about it with a smile on their face, they can face a world of increasingly more complex social and moral conundrums.

Lifeschool’s offices are located in the Bodega Stage Coach Stop in downtown Bodega. 707.876.3071 or www.life-school.org.