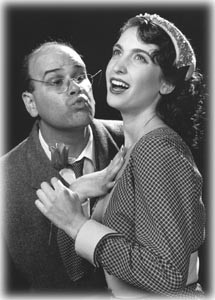 Lend Me a Tenor

Sucker Pucker: Danny Kovacs and Sharon Drake costar in ‘Lend Me a Tenor.’

Backstage wit in ‘Lend Me a Tenor’

Set in mid-1930s Cleveland, Tenor depicts the imbecilic undertakings of a young opera company that has engaged world-renowned tenor Tito Merilli (played with lusty panache and a hint of Pavarotti by Kevin Blackton) for a fundraising gala. The profligate Tito is placed under the charge and surveillance of horn-rimmed milquetoast Max (topnotch nebbish Danny Kovacs), who is the lackey of scheming theater owner, Saunders (Will Marchetti).

Over-the-top, door-slamming, dress-dropping comedy soon evolves in the tradition of writers Kaufman & Hart (You Can’t Take it With You), albeit with a dollop more sex, death, and celebrity worship. Mistaken identities, bed-hopping, and lingerie abound in this predictable but charming two-act burlesque aptly directed by Grice.

Danny Kovacs deploys the guardian Max so that the character’s inevitable revelations are believable, despite the comedy’s farcical nature. His pursuit of Maggie, the archetypal Boss’s Daughter (played with gawky aplomb by Sharon Drake), makes for some of the production’s finer moments, as the two pitch each other into emotional Mexican stand-offs with her father at the apex.

Maggie, a character infatuated with the exotic Tito and with the notion of inaugurating a carefree personal life comprised of consecutive sexual flings, benefits from Drake’s star-struck portrayal, often freezing–arms akimbo and mouth agape–as if awaiting a tonsillectomy.

Marchetti magnificently plays Maggie’s father, the stodgy man-of-means Saunders, steamrolling through the action, barking orders and eating the wax fruit. Marchetti is a brawny comic actor able to simultaneously present a fiery but beguiled character, bringing an emotional depth not even required to this admittedly light fare.

Bottle-blonde stage siren Diana, played to the cartoonish hilt by Carol Anne Brown, is a saucy ladder-climber who uses her feminine wiles to shimmy up the rungs of the opera world. Brown smolders and titillates as she careens bawdily about John Connole’s superbly crafted set–two rooms of an upscale hotel suite–which deftly utilizes every inch of Spreckels’ palatial main stage. Connole’s adroit, understated lighting design is a fine complement to the often breakneck action.

Lend Me a Tenor is infallible evidence that director Grice knows how to assemble and activate talent. Under his guidance, the Pacific Alliance Stage Company is certainly worthy of their happy home.