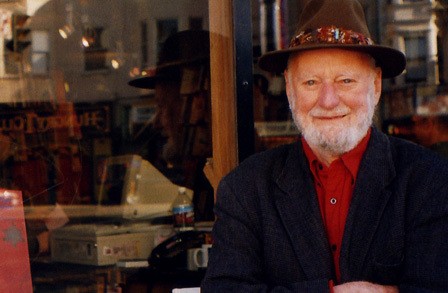 One of the most dramatic works on display, “The Golden Bird of Memory Attends Proust on his Deathbed,” depicts the last living moments of the famed French writer, Marcel Proust. Not just artists, but cities are also dying in Ferlinghetti’s phantasmagoric world. “Cross-Pollination” is the name of the show and it highlights the impact of poetry on art and art on poetry. It also shows the power of sex to influence both poetry and art. At 93, Ferlinghetti still has sex on the mind, and if viewers want to psychoanalyze him and his work, he doesn’t mind.

“Freud” depicts two naked figures: a black man with a white penis and a longhaired white woman, who look as though they’ve just had sex. But neither the museum’s executive director, Kate Eilertsen, nor the guest curator, Diane Roby, are playing up the sex and the death, but rather Ferlinghetti’s dedication to his medium, whether oils, acrylics, or pen and ink sketches from his notebooks. “In Ferlinghetti’s art words give rise to image-making, and word and image meld in paint,” Roby says.

“Cross-Pollination” offers a breathtaking introduction to Ferlinghetti’s life and work as a poet and as a painter that began in Paris in the 1940s. A recording of Ferlinghetti performing his poetry brings his voice to life. On display are his books, including The Coney Island of The Mind, which has sold more than one million copies since it was first published in 1955. English majors will get the literary references to James Joyce and T.S. Eliot’s anti-hero, J. Alfred Prufrock. Art majors will recognize Pablo Picasso. But you don’t have to know Eliot’s poetry or Picasso’s art to appreciate the work of the last of the original Bay Area bohemians. “Cross-Pollination” pays homage to an artist who won’t give up and who hasn’t called it quits. Locals have taken to staking out the museum, hoping for a glimpse of a genius just reaching his prime at 93.