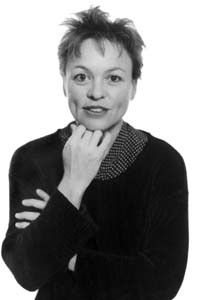 IT’S JUST 10 o’clock in the morning but performance artist Laurie Anderson already has written a song in Latin and stitched together guitar parts for an upcoming multimedia recording of Herman Melville’s quintessential American tale Moby Dick. Now she’s busily explaining to a curious reporter the meaning of life.

“I’m glad you asked about that–it’s really been on my mind lately,” says Anderson, light-hearted and humorous, during a phone call from a New York recording studio. “There are so many ridiculous things that get in the way of finding that answer and so many events swirling around people that prevent them from actually thinking about it.”

Of course, creating a leviathan production–replete with music, Corsican singers, and a dozen stage actors–all based on the search for a vindictive white whale, has given Anderson the chance to contemplate the big questions. “[The recording] is about that hunt, actually. Besides all those ‘whaling’ details, Moby Dick really is about someone who’s looking for something completely unknowable, so huge, something they’ve wanted all their life, yet they know that when they find it, it will kill them.”

And what of Anderson’s own quest?

“My whale?” she asks with a laugh. “Oh, I guess I try to find it in the sensual cornea, in music, because it will take you somewhere you don’t expect. You see, the other thing about whaling, it’s like trolling–the way a whale ship moves, it doesn’t really have a goal. Its goal is to look at things, just to keep a lookout. So for me the path is just zigzagging intuitively and trying to keep your eyes open. What you find may not be what you’re looking for.

In trolling the art world, Anderson has parlayed her share of critical raves for her quirky, highly evocative performances. The Trouser Press Record Guide has hailed her 1982 breakthrough album Big Science (Warner Bros.) as “perhaps the most brilliant chunk of psychedelia since Sgt. Pepper.”

Anderson’s latest performance piece–The Speed of Darkness–is light years away from the complex tribute to Melville that she’s cooking up in New York. The new show–which brings Anderson to the Luther Burbank Center on Sept. 3–is a stripped-down collection of stories and songs about the future of art and technology. Using the models of three disparate settings–a theater, a mental hospital, and a control room–Anderson will talk about how these places are merging to form a late-20th-century techno-culture. While she is best known for her lavish multimedia shows, The Speed of Darkness is billed as an informal evening with only keyboards, the spoken word, a violin, and digital processing.

Among other things, the piece will touch on the recent trend to combine work and fun, exploring the role of coffee, websites, and therapies for people who have used too much technology. “For example,” Anderson explains, “there’s Identity Therapy, which is based on the principle that if you don’t know who you are anyway, it frees you. I got this idea from some friends who work in an office and they said that they were getting really nervous from their coffee breaks. Every time they had coffee, it made them feel more and more driven. It wasn’t relaxing at all.

“So they started to have ‘wig breaks’ instead. Around 11 o’clock every morning they all went into a small room and tried on wigs for 15 minutes. After a while they weren’t really certain about who they were anymore and they found this pretty relaxing.

The beauty of The Speed of Darkness, Anderson says, is that it suits her love of things in their simplest form. “This is something I wrote two years ago. I realized, God, I still really think all of this stuff–it’s not like it’s gone away from me.

“But it’s based on large mental jump cuts, which I really enjoy making. The first few minutes tells you the jump cuts are going to be really wide. People kind of go, ‘Oh, OK, I’ll make a really large leap.’ Then it’s fun. But if they want to make a certain kind of logical sense, well, then it probably wouldn’t be fun. But, hey, you can get logic in school. I’m not really into teaching more messages or anything like that. I’m into making images that resonate with other people.”

ANDERSON’S eccentric life has prepared her for that mission. Over the years, she has collaborated with everyone from beat-poet William Burroughs and monologist Spalding Gray (Anderson wrote the score to the acclaimed film Swimming to Cambodia) to filmmaker Jonathan Demme and Peter Gabriel.

In 1972, she taught art history at various New York colleges and spent the entire East Coast winter wearing no coat. The next year she met avant-classical composer Philip Glass, the start of a friendship that led to an artists’ collective comprised of sculptors, painters, and musicians who often worked on one another’s creations and blurred the lines between art forms.

In 1974, Anderson hitched her way to the North Pole. Three years later, she spent two weeks not speaking in a Buddhist retreat, beginning a continuing association with that Eastern religion. In 1978, she created sound and visual installations at various museums and galleries in the United States and Europe, and worked as a shill for comedian Andy Kaufman on Coney Island (helping the seminal shock comic to taunt wannabe he-men on the midway). She also did a stint as a migrant cotton picker in Kentucky.

The following year, Anderson performed Americans on the Move at Carnegie Hall. In 1981, she released “O Superman,” a single that soared to No. 2 on the British pop charts and led to the release of Big Science stateside.

In 1987, her film Home of the Brave was presented at the Director’s Fortnight at the Cannes Film Festival. In 1989, she fell into an open manhole. Four years later, she fell off a Tibetan mountainside, a brush with death that inspired the reflections on mortality in her 1994 CD Bright Red.

THE SUM of that experience is an artist who fearlessly stretches the boundaries, and challenges audiences, especially in her spoken-word multimedia theater pieces, to imagine a world without limits. That often flies in the face of critics who are frustrated in their search for pop hooks in her haunting art pop.

“The fewer expectations you have the better,” Anderson says of critics who sometimes charge her work is all style and no substance. “I can completely relate to people not liking things, but it’s when you don’t like it for the reason that it’s supposed to be something else, you realize how strict we are.

“You realize, wow, those critics have got the world predesigned. Let’s say I’m in a meeting and I wanna scream really loudly or I wish I’d worn my pajamas or something like that, and I realize I can’t wear my pajamas to this meeting or scream because I’m not that kind of person. Then I think, well, maybe that’s a design flaw. Maybe when I designed my personality, it should have been a bigger design.

“A lot of people don’t do things because they say, well, I’m just not the kind of person who would do that, just I wouldn’t do that. I think, but why wouldn’t you? It’s because you’ve made this sort of picture of who you were and what you would do under various circumstances. A lot of people just follow that sketch and they don’t go and say, ‘I’m going to get out of my thing here for a minute, I’m going to do something really different.’ Whether you’re a writer or a critic or whatever, the world sort of pushes you in that direction because stylistically you’re supposed to be a little bit consistent.

“But it’s too bad. I think it locks people in–it limits their lives.

“So I think writers sometimes want to summarize, ‘What does this mean? What did we learn from this? What is this really about?’ But that’s a very 19th-century way of thinking about art, because it assumes that it should make our lives better or teach us something. I think maybe school has that application, but artists don’t, ’cause if you did, you’d just be handing out propaganda to make people’s lives better. You’d be giving them coherent tips about how to do it instead of vague ones.

“So I guess it’s a long way of saying, performance art is about joy, really, about making something that’s so full of kind of a wild joy that you really can’t put into words.”