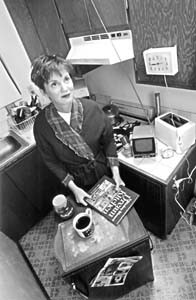 No room at dinner table
for green-eyed monster

ALMOST everyone has done it at one time or another: You slip into a friend’s kitchen for a spoon or a refill or the mop, and you just happen to look into a drawer. It’s a big drawer, you notice, made from smooth, well-oiled pine, probably shipped in by sailboat from Scandinavia and installed by a celibate vegetarian Buddhist cabinetmaker from Maine.

You remember the particleboard face that fell off when you yanked open your lone kitchen drawer last week. Or the cupboard that you’ve tried to open ever since you moved into your apartment, and now, six months later, you’re too scared of the contents to keep trying.

Does your blood boil? Do you retreat to the bathroom to sulk over a stiff drink?

Then you’ve probably got it: kitchen envy.

Kitchen envy is an inevitable development in densely populated urban areas where the level of food consciousness is inversely proportional to the amount of choice one actually has in choosing the arena in which this consciousness plays out. Those suffering from kitchen envy experience an irresistible attraction to other people’s food-preparation spaces and a feeling of teeth-grinding bitterness when a stash of pizza-parlor pepper packets and splintery wooden chopsticks are found therein.

Kitchen envy usually has its roots in that most formative period of a young person’s life: post-high school. Campus slums and other affordable establishments effectively prime us for shock by leading us to believe that this is as good as it gets. Red-papered kitchens with dorm-size refrigerators and rotten soggy cutting boards, counters so slanted that even cubes of butter slide off–these are merely conversation starters, punch lines to an opener that everybody knows: my kitchen’s so bad …

But it is after you graduate, or acquire co-workers whom you wouldn’t be frightened to visit at home, that kitchen envy kicks in. Because it’s brought on, not by what you don’t have but by what others do have. You see for yourself, visiting the rental pads of other, more fortunate souls, that it is architecturally possible to extend the countertop more than six inches on either side of the stove or sink. You observe that no building or aesthetic code is violated by having more than one electrical outlet in the kitchen. Maybe you get invited to a dinner party at an actual house, and stagger at the sight of butcher-block countertops with more surface area than some elementary-school gyms, a range that could support the heating requirements of hell and several busy Chinese restaurants, and a greenhouse window where the squirrels perform little Disney dances every morning.

KITCHEN ENVY is all the more bitter because of its seeming unsolvability. Most people can’t just go out and buy their own house to accommodate their slobbering lust for counterspace or roll-out appliance garages. And the more disgustingly bad your kitchen space is, the more likely it is that you live in an establishment where the landlord won’t even let you paint the walls a cleaner shade of white, let alone put in shelves.

The true horror of kitchen envy, much like its better-known Freudian counterpart, is that you may just have to live with it until you can afford to install different plumbing.

There are, however, a few things you can do in the meantime:

Simplify. The more stuff you have, the more space you need to store it. Look into specializing your output. Chinese cuisine, for example, demands very little in the way of equipment–a wok, some chopsticks, a bamboo steamer, maybe a battered saucepan with lid for rice–and it makes for lively dinner parties. You could go American colonial with one-pot cooking, or avoid the kitchen altogether by eating only what fits on the top of your engine block. Make your kitchen a walk-in closet. You probably need one of those too.

Improvise. The Surreal Gourmet offers a recipe of steaming salmon in the dishwasher as a pièce de résistance for a dinner party. If you’re a typical disgruntled rental dweller, you may not even have a place to put a dish drainer, never mind a dishwasher. But there are always other ways of improvising. That ironing board that falls open across the front two burners of your stove at dangerously inopportune moments? Leave it down, cover it with thick bright cloth, and use it for a pot rest. How often do you use more than two burners, anyway? To extend your food-prep surface, pick up one of those wooden bed trays. Put a cutting board on top, line the side cubbies with plastic bags, and you’ve got a portable work station that’s everywhere you want to be–the bed, the TV chair, the front porch (if you have one). It’s even better than an island on wheels because it’ll never get caught on that cracked linoleum.

Highlight the positive. Fabled food writer M.F.K. Fisher waxed lyrically of her tiny kitchen in Lyons, France, with a cranky two-plate burner and the water source down a flight of stairs. But it did, after all, have an enormous window that looked out over a picturesque square. Discounting even her youthful romanticism and incredible gift for language, we can safely say that Fisher felt good enough about her window to render the 3-by-5-foot kitchen, and everything cooked in it, completely charming. You probably don’t live in Lyons, but there has to be something that makes your kitchen utterly, endearingly unique. Find it and let the awareness seep into your culinary life like a good marinade. Harmonize with the hum of your refrigerator. Caress your antique drawer pulls with loving fingers–whoops! not too hard! Admire the caramelized patina of the grease-enameled stovetop.