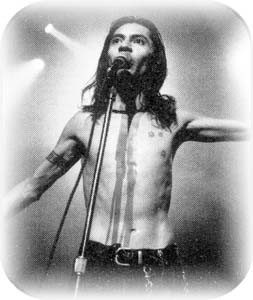 I THINK THAT ROCK CAN SERVE as a tool for social change,” says guerrilla artist and rock documentarian Ruben Guevara, who once collaborated with Frank Zappa on the doo-wop parody group Ruben and the Jets. “I mean, I’ve been a rocker all my life. Aesthetically, rock is to me a form to communicate confrontation and challenge the status quo.

“I’ve held to that credo all my life.”

For Guevara, that perspective provided the driving force behind his latest project, Reconquista! The Latin Rock Invasion (Zyanya/Rhino), a vibrant compilation of defiant Spanish-language anthems designed to ignite, shake, and rattle the psychic core of society.

“Many of the songs in this collection are simply blues in a different and broader context,” explains Guevara, during a phone interview from his East L.A. home. “Rock and the blues have evolved in Latin America as a way of purging the horrors of history.

It’s a real eye-opener for gringos. After all, you can count on one hand the number of Latin musicians who have broken through to the mainstream: Richie Valens, Julio Iglesias, Los Lobos, Gloria Estefan. Indeed, the death of Tejano singing star Selena–the subject of a new major motion picture–stunned the mass media, in part,because few knew about the enormous extent of her popularity within the Latin community.

“That’s a real good commentary on U.S. society in general,” Guevara reflects. “It just shows how departmentalized we are and how afraid we are to listen to stuff that’s in our own backyard. We’re just not very open to other cultures.

Visceral and passionate, the 17-track Reconquista! is a good place to start. Stylistically diverse, the criteria for inclusion required, not hits, but bands that are “saying something and saying it with power and passion,” Guevara says, specifically Latin rock bands that focus on social and political commentary.

“One of the first bands that I heard that totally knocked me out was Mano Negra, who were originally from Spain before getting kicked out of the country and moving to Paris,” he adds. “The first song I heard them perform was ‘Viva Zapata,’ an homage to the Zapatista rebels fighting Mexican government forces in the Chiapis region. I was blown away that they were politically aware and well informed and that they were actually doing a piece dedicated to that struggle.

“That set the tone for the compilation.”

One of the most chilling songs on the compilation is “El Matador,” in which Los Fabulosos Cadillacs of Argentina memorialize a Chilean poet–nicknamed El Matador–who had his hands amputated by police before thousands of horrified onlookers at a packed soccer stadium. His crime: writing seditious poetry.

“It was a brutal act and one that should be remembered,” Guevara says. “I mean, here was a man who did nothing more than tell the truth and he had his hands amputated in modern times!”

THE SPANISH BAND Seguridad Social deliver a bold condemnation of the conquest of Central and South America by Spanish conquistadors in the 15th and 16th centuries. “I think it offers incredible unity for Latins because even the Chicanos hold animosity toward Spain for the colonization and the repression,” Guevara says.

“We are the result of that–after all, our parents and grandparents moved up here because of economic oppression directly connected to the colonization and the conquest.

“History lives and bad memories are hard to put aside.”

On “JFK,” Nagu Gorriak–from the Basque region of Spain–debunk the Camelot myth that paints President John Kennedy as the superfriend of the world, even contending that Kennedy once conspired with dictator Gen. Francisco Franco to back an invasion of the countryside with American B-52s and U.S. Marines.

“In my estimation, not even the Clash are as strong as them,” Guevara says. “They can switch from punk-metal to salsa so fast that you can’t even imagine that they’re the same band.”

“Un Gran Circo” by Maldita Vecindad y Los Hijos del 5 Patio (The Children of the Fifth Caste of the Damned Neighborhood) is an eclectic mix of ska, rai, and carnaval drumming that centers around the main square in Mexico City, the original site of the Aztec temples long since demolished and replaced by a Catholic cathedral. Today, the square hosts a circuslike parade of beggars, protesters, and firebreathers.

The band, one of the top rock acts in Mexico, is now being courted by major labels in the United States.

“I hope that it sparks some interest in the non-Latin community as well,” Guevara says of the compilation. “Musically speaking, I think that it’s very interesting and fresh.

“I’d like it to connect with the world-beat audience.”

Unfortunately, Rhino Records has decided to issue the liner notes only in Spanish, though an English translation is available by mail or on the label’s Website.

IN MANY WAYS, Reconquista!–the first in a series of compilations focusing on domestic and worldwide Latin music–is the culmination of more than 30 years’ work. Born and raised in Los Angeles, Guevara recorded in the early ’60s with the Apollo Brothers doo-wop group. In 1971, he met Frank Zappa. “Our interests in music were similar, from doo wop to Bartok. And I was interested in rock theater,” Guevara explains.

Zappa, who three years earlier had created the doo-wop parody band Ruben and the Jets for a recording, suggested that Guevara put together a stage version of the band. “At the time, it seemed like a good opportunity, but I was burned out on rock: the flaky musicians and the low-paying gigs,” he recalls.

“I told Frank, ‘It sounds good, but there are just too many detours in rock.’

GUEVARA RECORDED two albums with the band on the Mercury label, the first produced by Zappa. “That lasted three or four years,” he says. “We split up and I started writing material that focused on more social and political issues.

A few years later, Guevara became one of the first artists on Rhino when label president Richard Foos in 1976 asked him to record a doo-wop version of the “Star Spangled Banner.” In 1983, Guevara returned to compile the two-volume Los Angelenos: The East Side Renaissance, featuring his band Con Safos and chronicling the then-emerging East L.A. roots rock scene (Los Lobos bowed out because of contractual problems), and a third album spotlighting the best of the Midnighters, the pioneering Latin rock band.

“Those proved informative to the rock press, which at that point didn’t really know about the body of work we had contributed as a community,” Guevara says. “But they didn’t do well commercially.”

He later worked as a performance artist, but in 1990 approached Foos about reactivating the label’s Latin music subsidiary.

“The vision then was to cover the whole U.S. Latin music scene, from the 1940s to the present.”

Foos agreed. In 1993, Guevara started planning a Raza music series, spanning 50 years of Latin rock. When he realized that there were no compilations focusing on the broad global Latin rock scene, Guevara went back to Foos and suggested that they start there and work their way backwards.

The result is Reconquista!

“My whole thing as an artist has been to confront the status quo and to make people look at our humanity with a new perspective and then to celebrate it,” he says.

“We all need to be revitalized by rock ‘n’ roll. The material on Reconquista! is meant to make us reflect and dance at the same time.

“With that combination, how can you lose?”