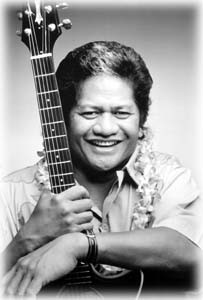 In Tune: Ledward Kaapana appears with other masters of the style on April 23.

HAWAIIAN CHEESE is legendary. Screaming aloha shirts and matching muumuus, tins of macadamia nuts sold for their weight in gold, the same syrupy-sweet strains of steel guitar dripping from the Muzak system in every airport, restaurant, and store–all bespeak the tourist industry’s unswerving devotion to schlock.

But they’re not fooling the Hawaiians. From Ka’u in the south of the Big Island to Haena in the north of Kauai, folks still come home from work, plop down on the couch with their guitars, tune them ki ho’alu style–Hawaiian for “slack the key”–and settle in for an evening of playing music and talking story. A lilting, relaxing style that fuses elements from folk, country, ukulele, and good ol’ campfire music, slack key has been around for 150 years and just keeps gaining popularity.

Slack key–which can now be heard stateside, thanks to an ambitious series on pianist George Winston’s eclectic Dancing Cat label–owes its existence to a few quirky circumstances. In 1832, King Kamehameha III hired Spanish and Mexican cowboys to control a cattle population run amok on the Big Island. The paniolos, as the Hawaiians called them (from español), brought guitars and played them around campfires at night. After they’d taught the Hawaiians the best of their cowboyish arts in the way of cattle damage control, they returned home, some generous souls leaving their guitars behind with the Hawaiians.

The official word is that the islanders adapted the tunings to their own music. In the un-PC and more entertaining version, however, no one remembered to show the Hawaiians how to tune their new instruments, and so sprang up a number of creative region-specific tunings that eventually assumed such whimsical names as “Wahine,” “Taro Patch,” and “Mauna Loa.”

Until the ’70s ushered in a resurgence in cultural pride and encouraged slack-key masters like Gabby Pahinui and Atta Isaacs to go public with their considerable knowledge, slack key was steeped in secrecy. Families so jealously guarded tunings and techniques that performers used to turn their backs to tune their guitars. Today, the tunings for each song are listed in the CD jewel case jacket, and would-be slack-key players can take university classes or learn from how-to videos and books.

Keola Beamer, Ledward Kaapana (with Bob Brozman), and George Kahumoku Jr. will perform the sounds of Hawaii next week at the Luther Burbank Center in Santa Rosa.

They are nurturing a style steeped in rich tradition. George Kuo–who has been playing slack key since the ’70s, the height of the so-called Hawaiian Renaissance–picked up tips from buddies and later from masters like Ray Kane and Pahinui. Kuo developed a silvery, precise, almost cerebral style of playing that nods to the old school of the ’30s and ’40s even as it flirts with jazz and improv, especially when he’s playing with his part-time band, the Sons of Hawaii.

“But we don’t go overboard,” insists the soft-spoken Kuo. “We try to keep it the old style.”

The Rev. Dennis Kamakahi–who really is an ordained Episcopalian minister, although he presides only “when they need the help”–enjoys the distinction of being one of Hawaii’s most popular songwriters. His song “Wahine ‘Ilikea” splashed across the islands when the now-defunct Hawaiian Style Band recorded a pop version of the song in the early ’90s. Like Kuo, Kamakahi started young, practicing his first chops on a ukulele as a tyke of 3 and moving on to slack key in high school. Kamakahi’s style of playing is warm and vibrant, each song a soulful consideration.

Indeed, most slack-key guitarists take their art to heart. “In my family, music was taken very seriously,” says Beamer, who wrote “Honolulu City Lights,” one of the most popular Hawaiian songs of all time. His most recent album, Mos’uhone Kika: Tales from the Dream Guitar, appeared on Billboard’s chart of top world music. “Music was an integral part of our lives, almost like religion,” he adds. “But Hawaiians are up against a shallow stereotype, often demeaning to our native culture.”