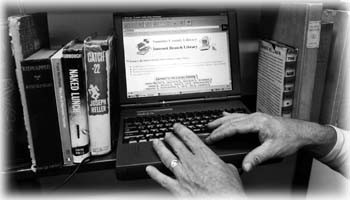 Digital Data: The library system’s Website is getting 10,000 hits a month, growing 10 to 15 percent a year.

SURE, SURFING THE WEB is great entertainment. But when you positively need to find out something absolutely, specific right now, plodding through lists of links in hopes of stumbling onto the facts you seek is not such an appealing enterprise.

Who ya gonna call?

How about Bo Simons? “After you get tired of clicking around and you really want to get somewhere, that’s when some kind of expertise and knowledge of how knowledge works is useful,” offers Simons, the Internet librarian at the Sonoma County Public Library.

“The one thing librarians offer to the world of the Web is experience in dealing with people finding information for millennia,” he elaborates. “What I bring to it is a feel for the way information travels, an instinct for what constitutes a good reliable source, being able to check currency and accuracy pretty quickly.

“It’s easy to click from here to there–finding things is what’s tough.”

In order to facilitate such searches, Simons has developed a home page for the Sonoma County library. The site has been in operation for nearly three years, but it is now getting expanded just in time for National Libraries Week. The service offers immediate access to many of the library’s reference works, as well as connections to other sources elsewhere on the Internet.

The local resources include the entire Sonoma County Public Library catalog, an index of periodicals and their contents (with links to the full text of many of the articles), the full community resource library, an index of local groups and organizations that the library has developed, and the archives of the Wine Library in Healdsburg, plus data about local employers and other useful information for job-seekers.

You can also find the locations and hours of operation of all county library branches. The access to the library’s catalog allows library patrons to reserve books and to see if those books placed on hold are awaiting pick-up–two heavily used services. These services can also be reached without going through the Internet; computer users can “dial up” the library directly via their modems and local phone lines. Internet users need a “telnet” utility in order to connect to the catalog files.

“Our goal is to make the library more usable to more people,” explains Roger Pearson, director of Library Services for Sonoma County. “With more people buying computers every day, we also want to make as much of the library as possible available 24 hours a day. The computer is tireless, and its capacity is just phenomenal. Even if we get 20,000 people dialing in, we don’t have to hire more staff.”

“I really see this as an answer to our problems of providing more access.”

Pearson says that the library’s Website registers 10,000 to 11,000 “hits” a month, “so we know that a lot of people do use it.” But he adds, “We don’t know what their success rate is in finding what they’re looking for.” Still, use of the digital data services is growing 10 to 15 percent annually, which he considers “good and healthy, considering our check-outs are going down 2 percent.”

Right now, computer users can make more use of the library’s online resources from home than is possible from within the library itself, although the library is working hard to change that situation. “We offer text-based Internet access through our public access, but our current cabling is not adequate for graphics,” Pearson says. “Even at the Central Library [at the corner of Third and E streets in downtown Santa Rosa], we only have one terminal that’s offering Netscape access.”

Upgrading the electronic infrastructure costs about $12,000 at each branch, money that is not available in the library’s operating budget. Instead, local Friends of the Library groups have been working to raise funds for that work, through such innovative efforts as the “Virtual Auction” held at the Sebastopol branch last month, which raised nearly $30,000. Rohnert Park obtained a grant from Longs Drugs to support the upgrading of two branches, while O’Reilly & Associates, a computer publishing and software firm in Sebastopol, has “been helping us with some of the cabling, and even doing some of the work,” Pearson says.

As a result of all these interlocking efforts, he adds, “Sebastopol will probably be up and running with four or five Netscape PCs in the next three or four months, and Petaluma is just about ready to go.”

Meanwhile, there are grand plans for the unseen technical side of the Internet site, too. “We would like to put in a CD-ROM server that has subscriptions to major reference works,” such as Consumer Reports, says Pearson, “so that at 10 at night you can do some research on buying a washing machine or a new car.”

Online access to investment information via the library is another goal.

However, says Jim Rosachi, manager of the library’s technical services, adding these types of services “can be $20,000 to $30,000 just for the equipment, and who knows how much more for the license for the information,” money that is not in the library budget.

“We don’t have a timeline for that,” he adds. “It’s just something we know would be useful information.”