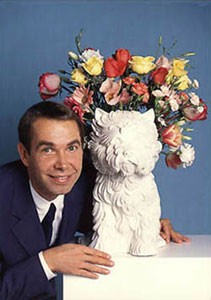 Is fashion our new profane religion?

Frank Lloyd Wright once said, “Fashion exists for commercial purposes only.” Wright was a great dresser, with dramatic capes and scarves and oddball porkpie hats. He was talking about fashion in the new modern industrial sense, an increasingly powerful system of seasonal revolutions and mass molting. Marketing agents, euphemistically known as designers and editors, render perfectly good wardrobes instantly obsolete, ostensibly for the sake of novelty, ultimately for the sake of conformity.

It makes no sense for a person to recycle cans and bottles if they’re afraid to wear last year’s sneakers. Yet somehow fashion remains immune to political analysis. No one thinks ill of it, despite its increasing sway. Most people who can name, say, a dozen couturiers probably cannot name 10 important painters or writers. It’s no exaggeration to say that fashion has replaced art in our society.

The art world did itself in. Its modernist system, in which progress was all-important, became exhausted, no longer able to engage the imagination of the public. It became a self-contained world divorced from the public at large. The artist’s reliable old tactic of epater le borgeois, shocking the middle classes, finally succeeded too well. The bourgeoisie found something better to do. They put on their designer clothes and went to the movies.

Fashion is much better suited to the rigors of relentless obsolescence anyway. Nobody cares much what it means, and you can talk about it endlessly. Also it’s easier to replace one’s entire wardrobe than a large art collection. And in a world that worships growth, progress and upward mobility, there has to be a system in place that constantly apotheosizes movement and struggle and continually recreates the pantheon of relevant personae.

For the last decade or so, we’ve seen fashion designers lionized by–and advertising in–the most important art magazines. We’ve seen artists courting designers, jealous of their popularity, and churning out fashion-based work dependent on the thinnest of implied critiques. Anyway, who needs Francesco Clemente when you’ve got Rei Kawakubo. The average media-savvy, progressive person can afford to own Comme des Garcons, Helmut Lang and Martin Margiella, but they can’t afford Koons, Prince and Polke.

In the democratic media state, for a long time we have been defined by our ideas, our aesthetics, our tastes. It used to be what films we saw, what books we read, what artists we liked. But who has time for that now? We needed something more immediate, and we got it: $500 sneakers and $200 jeans and seemingly priceless celebrity culture.

Fashion is our new profane religion. It embodies “now” attitudes, and transmits them across the world, creating a matrix in which the ancient struggles for production, reproduction and acquisition can carry on. It’s our new system of secret society.

Today, personality is the aggregate of thousands of consumer choices. We’ve become human hard drives, programmed with brand choices and, above all, fashion. But it’s complicated. Our fashions don’t always say who we are. They often serve as camouflage. You have to know the code.

The rise of casual fashion coincided with the rise of the new super-rich. America, the hope of the great middle class, has returned to robber-baron standards. The billionaire dresses just like the guy who picks up his garbage. You have to know the code.

The only way to act as a revolutionary force in today’s culture is to drop out of the fashion system and become your own designer. The opposite of fashion is style. Style comes from the same root word as stylus, a writing instrument, the stick that we used to make our letters or hieroglyphs on wax tablets, or the needle we use to scratch on our turntables. It’s how we make our mark on the world.