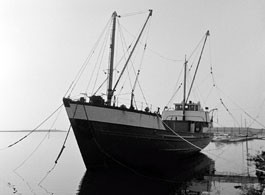 Docked: The white sturgeon appears to be on the wane, prompting the Fish and Game Department to change legal size limits.

The white sturgeon is the largest freshwater fish in North America. Big specimens may live for a century and outweigh a horse, and as we speak, these primitive, spiny-backed giants are moving slowly upstream from the Sacramento Delta toward the middle reaches of the Sacramento River to spawn. Stunned beachgoers occasionally see them breach the surface of the water, but even luckier is the fisherman who hooks into a white sturgeon on rod and reel. The big fish fight hard and they taste fantastic, and their presence is revered by recreational fishermen, especially in these hard times when the beloved Chinook salmon is largely off limits.

But now sturgeon, too, are under examination by California Department of Fish and Game (DFG) officials. A recent fish count deemed the animal’s population to be in very poor shape, and the department has tightened regulations on catching sturgeon. The decision leaves fishermen bitter, and they fear that yet another California fishery is on the way out.

A large hooked sturgeon makes for a thrilling affair. The fish may strip 200 yards of line from the reel, leap clear out of the water like a marlin and even shake the hook. It may also be a green sturgeon, a rare cousin of the white sturgeon, which fishermen generally release. But if the fish at the side of the boat is a white sturgeon, it is carefully netted and measured from nose to tail to make certain it is of legal length. Until this winter, state regulations required that a white sturgeon must fall somewhere between 46 and 72 inches if the angler was to keep the fish, a sensible system that aimed to protect immature juveniles as well as large breeders.

Now the upper limit is down to a meager 56 inches. Marty Gingras, supervising biologist with the DFG’s Stockton office, explains the size reduction. Sturgeon are a slow-growing fish, he says. A fish entering the previous 46- to 72-inch legal size bracket thereby entered a very dangerous age in its life that lasted 15 years; during this period, each sturgeon was faced with a 25 percent chance of being caught and killed before clearing the 72-inch mark.

The decision of the DFG to change the regulations stemmed from a population assessment project conducted in October 2005. Officials set adrift a 1,200-foot trammel net in San Pablo Bay and recorded the catch-per-hour rate, and they concluded that less than 10,000 white sturgeon remain in the Sacramento-San Joaquin drainage, a head-spinning decline since the DFG estimated a population of 144,000 in 1998.

Many people argue that the method used to count the sturgeon this fall was terribly faulty. “It’s just baloney,” says Keith Fraser, owner of the Loch Lomond Bait Shop in San Rafael. “There is just no credibility to the count they made. Fish have tails. ”

Peter Moyle, a professor of fisheries at UC Davis, agrees that the method used by the department was not perfect and that it left much room for error, but he has considered the situation objectively and looked at data from various sources. “There’s certainly no reason to think that the sturgeon population is thriving as it was a few years back,” he says, “and if the Fish and Game’s estimate is right, the decline is catastrophic.”

Historically, the white sturgeon thrived on the west coast of North America from Ensenada, Mexico, northward to the Gulf of Alaska. Though called the largest freshwater fish in North America, white sturgeon do actually take to the open ocean. They prefer muddy waters, however, and they spawn in estuaries or rivers.

If given the liberty to do so, an individual fish may live well over a century and grow to tremendous dimensions. A man near Red Bluff in the late 1800s reportedly threw a meat hook baited with a dead rabbit into the Sacramento River and some hours later hauled out a 1,500-pounder.

In 1885, commercial fishermen weighed in 1.6 million pounds of white sturgeon. In the next two decades, however, the catch rate crashed. Carefully managed fishery in the 20th century led to a great recovery, says Moyle, and by 1990, white sturgeon numbers may have been back up to historic levels.

But in the new millennium, something is amiss. The DFG’s population assessment may be overly pessimistic, yet local fishermen report a lack of small sturgeon in the water, which suggests poor spawning conditions in the middle reaches of the Sacramento River. Sturgeon require fast currents and temperatures of 52 to 58 degrees Fahrenheit if their eggs are to develop into successful offspring, but low water flows out of Shasta Dam regularly lead to sluggish, warm waters in the river downstream.

All it takes is 62 degrees or more to cook the fertilized roe on the river bottom. Even if a big female has not yet laid her eggs, the hot water running past her flanks may abort every bit of caviar within her–a tragedy, for it takes as long as eight years for a large female to produce another belly-full of eggs.

Sport fishermen comprise a powerful and passionate environmental watchdog group. They observe population trends and keep a constant eye out for poachers, yet they will take the heat for the U.S. Bureau of Reclamation’s alleged failures in maintaining sturgeon spawning habitat downstream of Shasta Dam. But what choice does the DFG have? Simple math dictates that fishing must be reduced until the sturgeon recover–but will they?