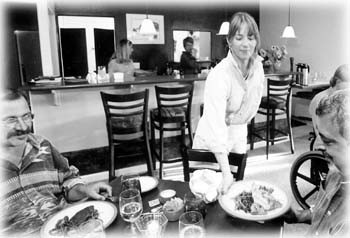 Stand the Heat: Eating at Kitchen is better than being at mom’s, after all–no one asks you when you’re going to have a baby, get a job, or cut your hair.

NAME your new restaurant “Kitchen,” and automatically you’re up against not just all the usual challenges facing any new food business, you’re up against mom. The kitchen in almost everyone’s childhood is the primordial source of love, the über-room where a parent’s affection is alchemized into breakfast, lunch, and dinner–not to mention Rice Krispie bars.

Jan Salisbury takes the “kitchen” challenge seriously in her new so-named restaurant in the west county wilder-town of Graton. She calls her cuisine “glamorous comfort food,” explaining that “this is the way I feel about food: It should be simple and taste good.” Revealing the truth of her words, simplicity and taste abound in her menu. (Rice Krispie bars, alas, do not.)

Open since mid-March in Cafe Dahlia’s old location, Kitchen offers fresh, hearty, abundant fare–Salisbury grew up in Bountiful, Utah–that is rather more glamorous than my mom cooked but no less comforting. Focusing on meats and seafood accompanied by county-grown vegetables and garnishes, Kitchen’s kitchen aims to zing the familiar with a jolt of the snazzy.

Our party of four was able to sample 80 percent of the menu–which is neatly displayed and described on a single art-enlivened page–without ordering anything extra. One companion began with a house salad she pronounced “dressed just right” with a simple vinaigrette; pecans and a bit of pungent Gorgonzola also woke up the mixed greens. Another companion found her asparagus sprigs a tad on the woody side but nonetheless perfectly steamed, and an accompanying creamy aioli seasoned with sun-dried tomatoes beautifully complemented the earthen taste of the vegetable.

An asparagus-potato bisque emphasized a fresh taste with excellent results, though the friend who ordered it admitted that his distaste for nuts made him frown at the surprise of almonds in the soup. My caesar salad, with big, crunchy romaine leaves drizzled with a classic, if slightly runny, caesar dressing, came topped with my preferred amount of grated fresh Parmesan cheese–lots–but the baguette croutons were stale.

The pan-roasted salmon I ordered arrived blackened and crisp on the outside, steamy on the inside–a somewhat unusual, though delicious, presentation for a dish not advertised as “blackened.” One companion’s pork tenderloin was another winner, the most succulent pork I’ve tasted in a long time. The tenderloin’s mashed potato/apple stuffing seemed a little plain, however–here, too much emphasis on “comfort,” not enough on “glamorous.” But the accompanying wild rice was spectacular, prepared in a wonderful reduction sauce. Kitchen’s comfort theme plays beautifully in the desserts; our table’s included an excellent apple crisp à la mode, a tapioca sparkling with mango, a light, fluffy pineapple upside-down cake, and a dense chocolate torte floating on a pond of sweet loose custard.

Complaints about too much salt prevented enthusiastic comments about the duck breast and most of the accompanying vegetables. The saltiness of the Liberty duck breast, indeed, violated rather than complemented the sweetness of the port and dried cherries. Owing to its load of olives, salt is to be expected in the pasta alla putanesca, but the fresh pasta was gluey under the sauce and the dish seemed like a leftover from last night’s casserole–the table’s only real disappointment.

Oversalting of a couple of items can’t be explained away by Kitchen’s newness, but the inconsistent service might be. While our order was taken quickly and efficiently, and our waitress removed a troublesome, crumbly wine cork with deft skill, a soda took far too long to arrive, bread had to be requested, and coffee with our desserts was forgotten.

Dishes came out of the kitchen and arrived at our table in pairs, making two of our number wait–this shouldn’t happen at a table of four on a slow night. Perhaps the wait staff is still getting used to Kitchen’s small space: 14 tables and four counter seats fill (but don’t cram) an area no larger than a first-grade classroom, its walls enlivened by a mustard, tomato bisque, and chocolate color scheme. Like a real kitchen, the souvenir salt-and-pepper shakers–a different pair on every table (ours came from San Francisco’s Cliff House)–were a wonderful touch.

Dinner for four, including salads, entrées, desserts, a bottle of Davis Bynum pinot noir and a Dutton Ranch chardonnay from the short but well-priced wine list, came to just under $200 with tip, a fair value. Worth the drive to Graton? Yes.