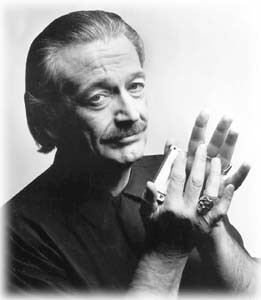 Charlie Musselwhite back on top

THE TURNING POINT came unexpectedly. Charlie Musselwhite–a harmonica player with a gift for the low-down, dirty blues and with a drinking habit that was legendary in blues circles–was driving to a nightclub in 1987 when he heard a radio news report that Texas toddler Jessica McLure had tumbled into an abandoned well.

Rescuers were fighting to save her life.

“That really moved me,” Musselwhite recalls. “I mean, here she was with her whole life in front of her and a real problem. And here I was whimpering about not being able to climb onstage without having a drink, which compared to her dilemma was no problem at all.

“As a prayer for her, I decided I would not drink until she got out of that well. After she was rescued, I just never drank again–so we both got out of the well,” he adds with a hearty laugh.

What a difference a day makes. Or a decade, for that matter. For more than 20 years, booze and blues had proved a potent mix that fueled the gin-soaked vocals and grinding music of this Memphis native, perhaps today’s greatest white harmonica player of the blues. But a life of excess had brought Musselwhite’s career to a virtual halt. He was dogged by bad luck and hamstrung by lackluster sidemen at shows that left the impression he was a lost soul teetering on the brink of an unseen abyss.

That’s all changed. Musselwhite, a 52-year-old Sonoma County resident, has cleaned up his act and is reaping the rewards of his efforts. After four critically acclaimed albums with a blistering blues band on a Chicago-based independent label, Musselwhite has released Rough News (Virgin/Pointblank), his major label debut.

In the past few years, Musselwhite’s return to form has proved formidable. In 1990, he won a national W.C. Handy Blues Award for Instrumentalist of the Year. The following year, he guested on John Lee Hooker’s Grammy-winning comeback The Healer, and joined Bonnie Raitt and others in a Showtime cable special and Madison Square tribute to Hooker. A couple of years ago, he popped up in the pages of Rolling Stone with Australian pop stars INXS after recording two tracks on their hot-selling X (Atlantic) album. And in 1995, he signed a potentially lucrative deal with Dan Aykroyd’s House of Blues label, which fell through but made way for his current record deal.

“I’ve just been staying on the path,” he says. “Toiling on. Things keep getting better and better. New doors are opening and everything is falling into place. Things are working out. Going according to plan.”

That’s good news for someone who seemed destined to become a bluesman. Born in Mississippi in 1944 at a time when blacks and the blues were migrating from the rural South to the bustling smokestack cities of the North, Musselwhite moved to Memphis at an early age and became immersed in that city’s diverse musical culture. He went to elementary school with Johnny Cash’s brother, Tommy, and lived down the street from rockabilly legends Johnny Burnett and Slim Rhodes.

“It was the first time I ever noticed a whole houseful of people with bloodshot eyes,” he says of those late-night jam sessions at the Burnett household.

At 18, he packed a harmonica and headed north on Highway 51 to search for a factory job in Chicago. Instead, he found urban blues, in all its soulful, gritty glory, reigning supreme at such famed black South Side nightclubs as Pepper’s Lounge, the Blue Flame, and C&J’s Lounge. Sitting in with the likes of Muddy Waters, Howlin’ Wolf, and harmonica great Little Walter Jacobs, who took the youth under his wing, Musselwhite soon became a much sought-after session player.

He learned his lessons well.

Onstage, Musselwhite is a blues powerhouse who electrifies audiences with sheer virtuosity and soaring, robust solos that range from a fiery wail to a beautiful melancholia. He’s constantly “reaching and stretching,” he says, not only mentally but with his heart.

“For me, when I’m soloing, there’s this thing I’m looking for,” he once explained. “You’ll be rolling along and all of a sudden there’ll be this spark; it’s not a conscious thing that you’re doing. Like Charlie Parker said, ‘I just hold it and let it sing.’

“I guess you could say it’s a spiritual kind of plane.”