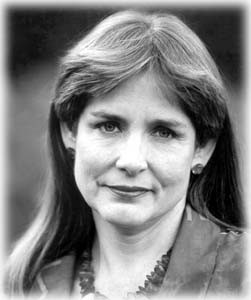 Joan Marler’s realm of the ancestors

JOAN MARLER bends forward to light two candles on either side of a flowering plant arrangement, and her necklace, formed from large chunks of Lithuanian amber, suddenly glints, catching the light for just a second.

A hush falls over the audience sitting in the Sonoma State University Art Building classroom. This small ritual precedes a slide-show presentation Marler is about to make about the work of her friend and mentor–the world-renowned Lithuanian archaeologist Marija Gimbutas.

Although the late Gimbutas is most commonly known as the “grandmother of the goddess movement,” having authored (among a variety of scientific books) The Language of the Goddess and The Civilization of the Goddess, Marler, 49, says the archaeologist’s work is far broader than this. As the editor of a new book of essays, Marler aims to illustrate the many facets of Gimbutas’ life and accomplishments.

“She moved freely among disciplines, combining archaeology with an extensive background in linguistics and an ongoing study of folklore and mythology. Gimbutas had the wisdom of a natural philosopher and the aesthetic perception of an artist,” notes Marler in the introduction to her In the Realm of the Ancestors. An Anthology in Honor of Marija Gimbutas (Knowledge, Ideas & Trends; $45.95).

Marler, a Sebastopol scholar, edited and helped write this treasure trove of mostly original essays by some 60 well-known and respected academics, writers, and critics of different disciplines, who acknowledge the importance of Gimbutas’ research and how it relates to their own work.

Contributors include artist/prehistorian Michael Dames and feminist writer Naomi Goldenberg, as well as Occidental-based writer Joan Sutherland and SSU art history professor Susan Moulton. In her classes, Moulton uses Gimbutas’ findings to illustrate the theory of the “sacred feminine” in works of art.

“Archaeological evidence unearthed and researched by Gimbutas and others suggests a new understanding of myths and legends which emphasize cyclical nature, embodied by images of the ‘sacred feminine’ that predate the emergence of the patriarchal God of Judeo-Christian tradition,” writes Moulton, who concludes that “Gimbutas’ decipherment of hybridized symbolic structures has made possible a new paradigm for revisioning history which can be extended to ancient, medieval, and Renaissance imagery.”

Indeed, according to Marler, Gimbutas’ most striking research, which began in the late 1960s, showed that the earliest cultures were earth-based, peaceful, and well-developed, with women and men both in key roles, and not patriarchal and warlike, as was commonly believed. Gimbutas sought meaning, and, through her interdisciplinary approach, was the first to interpret what those cultures were.

“It was a radical retelling of the origins of Western civilization,” says Marler. “The old idea was that civilization started with patriarchy–but that came later.”

Marler says Gimbutas struggled to achieve credibility in a male-dominated field. “[Gimbutas] had no agenda, she didn’t set out to prove this, it came out naturally and organically from her research and it surprised her as well,” Marler observes. “She was not a whacked-out goddess person–she considered herself a scientist and simply described what she saw and found.”

Marler met Gimbutas in 1987, and became her personal editor. When the archaeologist was stricken with cancer and became too ill to lecture, she sent Marler in her place. “I had absorbed everything I could, and I could speak in public, so I carried on,” says Marler. “Basically, she passed her work on to me. It was a tremendous stimulation to my development. She was an absolute genius, a taskmaster who required a tremendous amount of focus, achievement, and integrity.”

Gimbutas succumbed to cancer in 1994 at age 73, and Marler has gone on to become an international lecturer. The Sebastopol resident wears as many different hats as her mentor. Well known through the airwaves as a producer and host for KPFA-FM 94.1 radio, Marler recently produced an eight-part radio series on last year’s women’s conference in Beijing, China, which she attended. In June, Marler will chair a two-day presentation on Gimbutas’ work at the Smithsonian Institution in Washington, D.C.

Taking all her findings into consideration, what has been Gimbutas’ greatest legacy? Marler answers without hesitation. “Her work struck a chord that continues to resonate within and beyond academic spheres. It gives us a vision of what we can re-create. This view is giving us hope right at the end of the millennium when most people are seeing apocalypse. There’s a groundswell of people saying, ‘She’s confirming what I know in my bones is true–we haven’t always lived like this.'”

Marler reveals that the book’s title was born from a possible message about survival:

“Shortly after Marija Gimbutas died, I had a vivid dream that told me she is now in the realm of the ancestors. She spoke in a fierce voice, saying, ‘You must remember us!’ I was shaken awake with the distinct feeling that this dream was not only for me.”