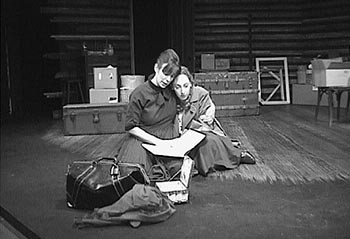 BEFORE ENTERING Actors’ Theatre’s production of Kindertransport, audiences are advised to stuff their pockets with the Kleenex thoughtfully provided in the atrium. You will need it. You’re going to cry. Consider wearing a life preserver, perhaps even hip-waders.

Inspired by the real-life evacuation of 10,000 Jewish children from prewar Nazi Germany and their subsequent placement in English foster homes, Kindertransport chronicles the emotional predicament of a woman navigating the harrowing floodwaters of survivor’s guilt.

The play simultaneously depicts two epochs in the woman’s now normal English life. Evelyn (née Eva Schlesinger, marvelously portrayed by Mollie Boice and Rebecca Miller as the mature and younger versions, respectively) has spent a lifetime reinventing herself so as to obscure a painful past that includes the loss of her parents and the lascivious advances of a child-abusing Nazi, among other hardships. To Evelyn’s deep chagrin, her original identity is exhumed by her inquisitive 20-something daughter, Faith (played by Michelle Olmstead), from a trunk in a family storage room. An emotional cataclysm ensues as Evelyn systematically deconstructs the Memory Lane she has built to bypass her former life.

Director Tim Hayes’ spare production strips the play down to its essential emotional elements, leaving no room for the easy manipulation often associated with material of this nature. Hayes seems to engender real sentiment on the part of his players, and the audience benefits. It makes the difference between seeing a play and experiencing it.

Boice is simply exhilarating as she moves her character heedlessly into the play’s emotional white water. Her Evelyn is whole and palpably pained, and her experience is so effectively conveyed that it becomes our own.

Miller expertly portrays Eva’s transformation into Evelyn, traipsing from German to English accents with expert character shading, as when her voice subtly quavers when she first insists on being called Evelyn.

The play’s emotional tautness mercifully slackens with the comic asides of the gracefully understated Olmstead, whose comedic sensibilities are well suited for the part of the nosy daughter Faith. Adding further comic relief is Cameron McVeigh, who ably inhabits a handful of roles, including an officious English postal worker and a persnickety officer. McVeigh also does chilling turns as a Nazi and as a German children’s book character, the Rat Catcher (a riff on the Pied Piper, the play’s key motif).

Yes, Kindertransport throws open a lot of emotional floodgates, but in the end, it will invariably buoy your soul.

Last of the Red Hot Lovers