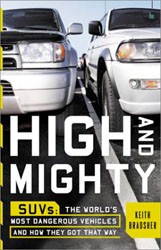 ‘High and Mighty’ chronicles the rise and rise of SUVs

Meteors, a cold snap, maybe a nasty virus–scientists can’t agree on what ended the first reign of the dinosaurs. But today they’re back in business, as anyone driving down any American highway knows. Is that a T. rex thundering along in the carpool lane? Nope, it’s a 7,700-pound, 19-foot-long Ford Excursion. Is that a brontosaurus backing ponderously out of that Costco parking space? Hardly anything so primitive: it’s the massive Cadillac Escalade.

Yes, sports utility vehicles–from the agile but ferocious Jeep Wrangler to the crushingly powerful GMC Yukon–dominate the food chain in a way wistful old allosaurus could only dream of.

But this neo-Cretaceous era is not without controversy. To admirers, SUVs are comfort and safety on wheels, mobile fortresses in a dangerous world. Keith Bradsher has a different view. As Detroit bureau chief for the New York Times, Bradsher witnessed firsthand the rise of the SUV, and he is not a fan. In a new book, High and Mighty (Public Affairs; $28), Bradsher explores the dark side of what he calls “the world’s most dangerous vehicle.”

It’s a complicated story, but Bradsher lays it out with vivid clarity. Once upon a time, rising gas prices and improving technology were convincing Americans to drive more fuel-efficient cars. But an array of factors, ranging from a new gas glut to short-sighted decisions by federal regulators to the self-centered psychology of middle-aged vehicle buyers, offered automakers an opportunity they couldn’t refuse.

In the end, Bradsher says, it comes down to this: “The manufacturers’ market researchers have decided that millions of baby boomers want an adventurous image and care almost nothing about putting others at risk to achieve it, so they have told auto engineers to design vehicles accordingly.”

We’ve grown accustomed to scare stories about consumer products. But the case Bradsher makes against the SUV may give pause to even the most cynical. The problems stem from one basic fact: because SUVs are classified as light trucks, they are not subject to the same safety, fuel-efficiency, or emissions standards as cars.

That results in vehicles like the Ford Explorer, which gets 14 miles to the gallon in the city, even as the average new vehicle in Japan gets more than twice that. Then there’s the Chevy Suburban, with extra-heavy-duty suspension, which is allowed to emit 7.5 times the air pollution of a car.

In a chapter titled “Kill Rates,” Bradsher explains what SUVs do to thousands of drivers of smaller vehicles–people like Diana de Veer, whose Saab was demolished by a Range Rover in a collision that left her with permanent brain damage. As Bradsher explains, “Men and women like Diana de Veer are being needlessly maimed and killed every day by stiff, high-riding SUVs that slide over cars’ bumpers and sturdy door sills, slamming into the passenger compartments.”

The kicker–call it the funny part, if you have a sick sense of humor–is that SUVs don’t really provide extra safety to their own occupants. True, most models offer greater protection in collisions with other vehicles. But their lethal rollover rates more than compensate.

Can anything be done to rein in these beasts? Bradsher doesn’t offer much hope. After all, as he carefully explains, SUVs have been incredibly profitable for powerful political constituencies like automakers and their unionized workers. Will they give up their cash dinosaur? As Charlton Heston would say: “From my cold, dead hands.”

And that pretty much leaves car drivers to grit their teeth and maybe pray for another meteor.