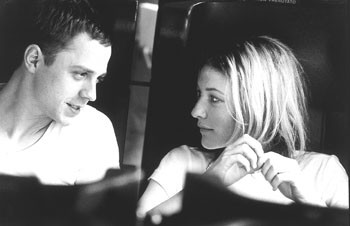 Bald and penitent, Cate Blanchett stars in the arid ‘Heaven’

After a very fast and shallow hit titled Run Lola Run, the German director Tom Tykwer has headed for deeper, more rooted material. Heaven is based on a screenplay co-written by Poland’s Krzysztof Kieslowski. The story has the skeleton of an action movie, with a jailbreak, fugitives in love, and police chases, but it’s really about transgression and repentance.

Just like the celestial spot it’s named after, the film exists in a set of circumstances that would be hard for the average person to imagine. Philippa (Cate Blanchett), an English teacher living in Turin, Italy, uses a time bomb to blow up the office of a drug kingpin. But the drug lord isn’t injured. Because of a twist of blind fate–the random chance that so often intoxicates Tykwer–four passersby are blown to kingdom come. The police find and capture Philippa with remarkable speed and take her in for questioning.

We learn her reasons, but the police have no interest in them. Since the drug lord poisoned her husband and killed a little girl, she’s an honorable avenger, yet the police do nothing because they are on the criminal’s payroll. Philippa’s in misery because of the innocent blood on her hands. However, the police still think she’s a terrorist–a crafty one with a pretty odd story, admittedly.

When Philippa demands the right to testify in her own language, she is granted an interpreter, a young and angelic policeman named Filippo (Giovanni Ribisi) who volunteers for the task and quickly falls in love with the repentant woman. He decides to risk everything to help her escape.

Heaven‘s one part of a trilogy of screenplays Kieslowski co-wrote with Krzysztof Piesiewicz (co-author of the films Red, White, and Blue.) The late Polish director planned a sequence that when finished would have encompassed Heaven, Hell, and Purgatory. Watching this Heaven sequence suggests why the Hell sequence is everyone’s favorite part of Dante–Hell is more fascinating.

The purifying of the two lovers (Philippa and Filippo, two halves of the same person) begins after their passage through a railroad tunnel (like death) and arrival in a town removed from the world–a limbo. Together they reclaim a lost state of grace, from confession to contrition to penitence. The last stage is indicated by both leads shaving their heads, ostensibly to fool the police.

It never struck me previously how actors really use their hair as part of their masks; when their heads are bald, there’s so much less to act with. Ribisi, plump and with a puckered look from the sufferings of true, pure love, looks a little like a young John Lithgow. He’s better than he’s ever been. By contrast, the usually stunning Blanchett never gets her footing here.

Tykwer’s visual motif in the film involves plenty of aerial shots–“God’s eye” camera–including a love scene conducted in silhouette seen by helicopter. The same helicopter ultimately represents transubstantiation when it rises in the sky to a vanishing point–inspired, yes, and reverent too. Yet Heaven is as free from humor as a Jesuit’s argument. This film works through a system of symbolism so inflexible that this movie might as well be based on an algebra textbook.