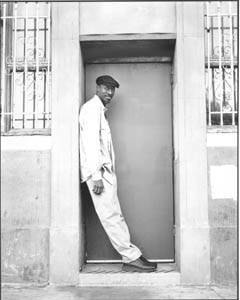 WHEN he arrived on the national blues scene with his self-titled 1994 CD, Keb’ Mo’ became immediately known for helping breathe new life into the acoustic blues style. Though it had songs that featured accompaniment from other instruments, the eponymous CD clearly established the bluesman as an artist building on what acoustic-oriented artists like Mississippi John Hurt and Taj Mahal had done before him.

Gradually, though, Keb’ Mo’ (his real name is Kevin Moore) has built on the acoustic blues foundation. And by the time of his third CD, the 1998 release Slow Down, he had expanded considerably on the acoustic sound. With the exception of the solo acoustic “I’m Telling You Now” and a cover of Robert Johnson’s “Love in Vain,” the remaining 10 songs featured full-band arrangements, with songs like “A Better Man,” “Soon As I Get Paid,” and “Muddy Water,” rocking quite convincingly.

Yet Mo’s new CD, The Door, finds the singer-songwriter taking a step back toward his roots. To be sure, there are plenty of songs with full-band accompaniment, such as the funky gospel-informed “Stand Up (and Be Strong)” and the gentle pop-tinged ballad “Come on Back.” But the new CD is perhaps more defined by songs like “Loola Loo,” “Anyway,” and the title track, which, even though they include some additional instrumentation, are centered around Mo’s vocals and his acoustic guitar.

“The Door is a little closer to home,” Mo’ says. “I meant it to be very acoustic-friendly, meaning that I could play the songs solo.”

For the Philadelphia-based singer-guitarist, The Door promises to build on an impressive run that has seen both his second and third CDs capture Grammy Awards for best contemporary blues artist.

That Mo’ would succeed so impressively so fast after emerging on the national scene is remarkable, considering the meandering path he’d followed for much of his career. In 1973, he made his first inroads, at age 21, when Papa John Creach, the late violinist who recorded with Hot Tuna and Jefferson Starship, happened to stop by a rehearsal space where Mo’s current band was practicing. Creach liked what he heard and hired the group on the spot. Instead of continuing to pursue jobs as a sideman after his three-year stint with Creach, Mo’ instead signed on as a contractor and arranger of demo sessions at A&M Studios. His studio work helped him land a record deal in 1980 with a subsidiary of Casablanca Records, Chocolate City.

BUT THE sessions for the album went sour as Mo’, who was plagued by vocal problems at the time, let others take control of the recording sessions. The finished CD, Rainmaker, stiffed commercially and critically, and Mo’ returned to the Los Angeles club scene. He had a variety of gigs, some good (such as a stint in a group led by Monk Higgins that frequently had top blues stars such as Big Joe Turner and Albert Collins stop by and sit in on sets), others not nearly as noteworthy.

It wasn’t until 1990 that things started to fall into place. That’s when Mo’ was invited to play a role as a musician performing Delta blues music in a play produced by the Los Angeles Theater Center called Rabbit Foot. The role gave Mo’ the opportunity to delve further into the music of such acoustic Delta blues artists as Big Bill Broonzy and Mississippi John Hurt.

After a couple of years of studying the style and exploring his own writing and performing talents, Mo’ landed a record deal with OKeh Records, a longtime blues label that was being revived by Epic Records. His career has been on a fast track ever since. And the collaborators on The Door are a good indication of just how much respect Mo’ had earned over the course of just three solo CDs.

“Blues is a genre, like country is a genre,” Mo’ says. “Songs are just the songs. I mean, you can do a blues version of ‘The Way We Were.’ All you do is just change the chords, decorate the song differently, sing it differently. I took that tip from country. Country songs have been crossing genres from country to pop to rock for years. Because they’re just songs. The song doesn’t make any difference.

“I mean, like people can take a country song and make it jazz or R&B, make it more country, bluegrass, pop-country, whatever. I’m from the school of get the song first.”

Way of the World