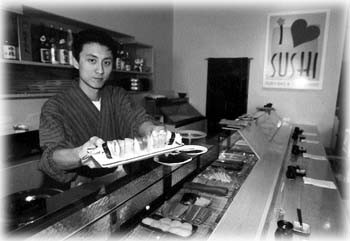 Get a raw deal at Petaluma’s Kabuki, and be glad of it

SUSHI SUCCEEDS when it is offered in variety, prepared with quality, and presented with the elegance and delicacy of a Japanese enamel. Sushi’s very definition lives in these characteristics. Without one, two, or all of them, it is all just so much raw fish.

Kabuki, the Japanese sushi bar and restaurant in downtown Petaluma, excels at the presentation, hits middle ground with quality, and falls a bit short in variety when compared to the sushi palaces of San Francisco, but by any standard offers a well-priced taste of authentic Japanese cuisine.

We tried a variety of Kabuki’s sushi with pleasing results: the hamachi featured tender, almost soft (but not mushy) slices of yellowfin tuna atop rice; a colorful serving of ikura showcased delicate–though slightly runny–orange salmon eggs atop a pillow of white rice wrapped in a dark green seaweed leaf; and Kabuki’s California roll, a sushi-bar staple, was deliciously heavy on the crab, light on the avocado.

A garnish of pickled ginger was tart without being sassy. The presentation was picture-perfect in every instance: indeed, plucking at the hamachi and the roll with chopsticks felt a bit like hacking at a Japanese garden with a pickax. On the other hand, sips from a glass of blood-orange Japanese plum wine were a wonderful follow-up to each bite of the sushi. My only complaint is that the wait between ordering and eating seems a bit long, since Kabuki’s bright, almost harsh, lighting and hard surfaces don’t encourage the kind of intimate conversation that makes time disappear.

Our appetizers included a plate of excellent gyoza, which are best described as Japanese potstickers, and two skewers of the grilled and sauced chicken yakitori. After a mixed-green salad drizzled with a tasty, peanuty dressing, followed by a cup of mild miso soup, we enjoyed entrées of chicken teriyaki, tempura, and sukiyaki.

The chicken in the teriyaki wasn’t quite as tender or moist as the yakitori chicken, and the crusty tempura batter, which should be light as a Hokusai wave, tasted a bit oily, but the sukiyaki, served in a metal container fit for a lumber jack, was nothing short of wonderful. Deeply onioned, thick with clear Japanese noodles, and covered with a flotilla of thinly sliced cooked beef, the dish was absolutely exquisite–and absolutely filling. Forget breakfast the next morning.

The bill for four, including sushi, appetizers, entrées, sodas for the kids, and glasses of plum wine and sake (don’t miss the excellent and informative sake list!) for the adults, totaled a couple of bucks under $90, with tip. A good deal.

Johnny Huang and Bruce Chiang, who lead the partnership that opened Kabuki eight months ago, learned the sushi trade over a couple of years at restaurants in San Francisco and San Rafael. In their apprenticeship they connected with a critical associate, a good fish supplier. Trucks from the Japan Fish Co. in San Francisco roll in early every morning to deliver fresh tuna, salmon, crab, and abundant other aquatic creatures. The freshness is significant and detectable.

You won’t regret paying for it.

From the April 3-9, 1997 issue of the Sonoma County Independent