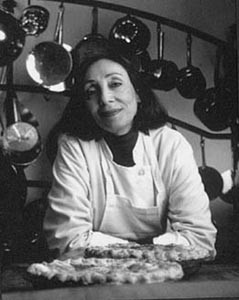 POLENTA, pomodori, pepperoni . . . these are some of the products that Italy is known for. Many sharp-eyed gourmets know that these ingredients–corn meal, tomatoes, peppers–were brought back from the New World. But, as Joyce Goldstein outlines in her excellent introduction to Cucina Ebraica: Flavors of the Italian Jewish Kitchen (Chronicle Books, 1998; $29.95), these ingredients were most likely introduced to the country by the Jewish population that was always small–never more than a few hundred thousand–but remarkably significant in terms of the evolution of Italian food as we know it today.

In retrospect, this influence was one of the few silver linings to the cloud of anti-Semitic oppression that cloaked medieval and Renaissance Spain and Italy, according to Goldstein and her sources. Some Jews had lived in Italy from 200 B.C., and their persecution has been documented for nearly that long.

“The Jews were allowed to do only certain professions, and import and trade was one of them,” says Goldstein.

Because of this segregation, the Sephardic Jews in Spain were uniquely positioned to be among the first to see the new vegetables brought in on Columbus’ ships. Driven away by the Spanish Inquisition, the Spanish Jews brought the new crops to Italy, where the Jews in trade there would have been the first to try them out and introduce the vegetables to the rest of the Jewish population.

In spite of these important contributions to Italian cuisine, Jewish Italian food has gotten very little attention in the United States. The reason is simple: most Jewish immigrants to the United States have been Ashkenazi, from Central and Eastern Europe. This population brought in food that can be delicious, but all too often home-cooked Ashkenazi food is interpreted as bland and overdone, says Goldstein. “Sephardim are in the minority here, but they got better food,” she says with a wry laugh.

Goldstein has sought out that “better food” for most of her professional life. Square One, her acclaimed restaurant in San Francisco, was a showcase for Mediterranean specialties. And her next book explores even more far-flung regions of Jewish culinary influence: Greece, Turkey, North Africa, the Arab countries.

Over the centuries the diaspora of Sephardim from Spain spread across the Mediterranean and Middle East, even to India and China, leaving ever-shifting communities of Jews to adapt new foodstuffs to the age-old demands of kosher law.

Kosher law regulates the serving of certain seafood (no shellfish or fish without scales) and animals (only cud-chewers with cloven hooves, slaughtered in a kosher fashion). Most important, kosher law requires that meat and dairy be kept separate at all times: no Parmesan over a meat sauce, no cream-based desserts at the end of a meal with meat. Non-Jewish cooks may be perplexed at these restrictions, and of course do not need to observe them, but they will find a wealth of possibilities within these ancient dictates.

Finding the traditions in the first place was an act of both faith and scholarship for Goldstein.

“I am a food historian, in addition to being a good cook.” What she found in her research were fragments, recipes presented in Italian cookbooks as regional specialties, without any indication of their Jewish-influenced history. Or they were oral traditions jotted down by friends of friends, with all the spotty directions that usually entails: “add a handful of flour” or “roast until done.” Even if the recipe appeared in one of the few Italian Jewish cookbooks, Goldstein still had to do some research. “Often people print the recipe, but they never bother to show you the roots of the tradition,” she says.

FOR CLUES, she most often turned to such simple things as ingredients. Take eggplant and fennel, for example. Now thoroughly integrated into Italian cookery, these vegetables once were as segregated in the greengrocer’s window as the Jews were themselves in larger society. The Jewish Italians picked up on them first, which meant that other Italians avoided the vegetables well into the 19th century. Dishes were also named alla ebraica or alla giudia (pronounced “judea”), or perhaps included a biblical figure in the name: crema di carciofi Ester (artichoke soup, symbolizing the bitterness in life) or pollo Ezechiele.

Such weighty biblical connotations could be lost on most cooks. But even a “cultural Jew” such as Goldstein says her work at the crossroads of culture and cuisine has changed her life in subtle but important ways.

“It has made me aware of my Judaism in a very different way,” Goldstein says thoughtfully.

“I am not necessarily going to become kosher or an Orthodox Jew, but I have developed a huge admiration for the ability of a culture to stay joyfully alive.”

Joyce Goldstein will be demonstrating a dairy-free holiday menu from Cucina Ebraica at Ramekins Sonoma Valley Culinary School on Wednesday, Dec. 1, from 6:30 to 9:30 p.m. Registration fee is $55. For details or to register, call 933-0450.