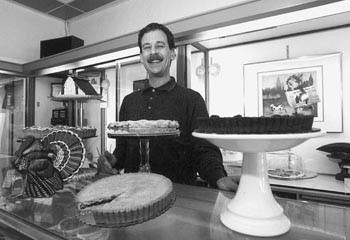 FORGET VETIVER, geranium, and bergamot. At this time of year, the sweet fragrance of Christmas cookies, pumpkin pies, or rugelach turning golden in the oven is the ultimate aromatherapy. The enticing scent envelops the kitchen and transports you back to a time when your grandmother was baking for the holidays. It subconsciously fills you with that warm secure feeling of being nurtured. And it causes a childlike twinge of excitement because it signifies the beginning of the festive holiday season.

In my family, the holidays really began with an annual visit from my grandmother, who would arrive from the north of England proudly bearing an airtight old biscuit tin crammed with layers of home-baked goodies: strawberry jam tarts, glistening like red jewels; sunny lemon-curd pastries; and tiny sweet-mince pies dusted with powdered sugar.

We’d dip our hands into this aluminum treasure trove and extract a flaky treat. We loved them all (even the couple that were always invariably “decorated” with a stray hair from Nanna’s white cat). I think we especially prized this holiday offering because no one else in the family knew how to make pastry.

The days when apron-clad grandmothers and aunts regularly clustered over cookie sheets and pastry boards may be gone, but there’s something about the holidays that compels even those folks who do little baking throughout the year to scrub out their cake pans and dust off their candy thermometers.

Yet the thought of baking can send cold shivers down the spine of even the most proficient of cooks. Some bakeries, such as Healdsburg’s Downtown Bakery and Creamery, understand the dilemma of yearning to bake but feeling incapable. They offer their popular old-fashioned “Sugar Baby” pumpkin pies either fully baked or as a kit consisting of a frozen ready-to-bake shell and a container of filling. “So you can bake it yourself at home,” the packaging exclaims. Foolproof!

But why is baking so scary?

“It’s because baking is not quite as freeform as regular cooking–there’s a bit more chemistry involved,” explains Michelle Marie DeFors, owner and pastry chef at Michelle Marie’s Patisserie in Santa Rosa. “Beginners should start with a tea bread,” she suggests. “Pies can be a bit daunting.”

According to DeFors, even many inexperienced bakers have a problem making pie crust. “Things like rolling it out, dealing with shrinkage, and being sure to let the dough rest before putting it into the pie plate can all cause problems,” she says.

So does this pastry chef, who often fields “emergency” calls from home bakers begging her to help save their failed works in progress, have any tips to share?

“I think it’s best to freeze the pie crust first before putting in the filling,” she says. “And if your crust has droopy edges, make a little foil collar for the sides and fix it on with paper clips, then remove it later to finish browning.”

FOR DEFORS, who grew up in Sebastopol, the flavor of apples became synonymous with the holidays. “My whole family loves food and we all baked together,” she recalls. “Those special apple cakes, pies, and streusels played a big part in our holiday traditions.”

She advises that once you get more accomplished in the baking world, you can experiment a little. “Take something from a memory and alter it into a new idea,” she says. “It’s fun.”

Beth LaFrance–whose homey business Beth the Baker in Sebastopol will feature cranberry orange-nut bread, pumpkin bread, and gingerbread for the holidays–has a few more tips. “Always measure accurately and don’t stray from the recipe, because that can really upset the balance,” she says. “Try one simple recipe, follow it faithfully and make it as close to consumption as possible, because freshness counts.”

If you’re making Christmas cookies, you don’t need to keep peeking in the oven, she adds. “When you can smell the cookies, they’re probably done.”

According to LaFrance, the art of baking is unique because you start out with a bunch of ingredients that look nothing like your finished creation. “It’s not like making soup or roast beef,” she says.

Is there one baking item that LaFrance couldn’t live without? “Definitely parchment paper,” she immediately replies. “I use it for everything. My food never touches a tray or a baking pan. The parchment paper keeps the food from sticking and the bottoms from burning.”

HOW DO bakers come up with new holiday creations? “It’s a selfish thing according to our own taste,” says Steve Bernstein, of 21st Century Pastry in Petaluma. Bernstein and his business partner, Phyllis Heagney, sit face to face in a small room and throw out ideas for new seasonal treats. “We like intense flavors and different twists on traditionalism,” he adds.

“I don’t think my creativity developed until I was in the field,” says Bernstein. “However, my grandmother was a great influence–her favorite was coffee; she used it in everything–for years. I thought coffee Jell-O was normal,” he quips.

That particular culinary encounter influenced Bernstein’s coffee chiffon pie with orange juice in the crust. “Baking is a science more exact than cooking and a recipe has be to followed to a T. It shouldn’t be fiddled with unless you know what you’re doing,” he advises. “But it’s nothing to be afraid of–if you follow the directions.”

The holiday season is pastry chef Condra Easley’s favorite time of year. “It seems so magical in here,” says the co-owner of Renaissance Pastry in Santa Rosa.

She describes some of the bakery’s winter delights: linzertortes topped with cranberry-raspberry-blueberry compote cooked with honey, cinnamon, and orange; pumpkin cheesecakes with a gingersnap crust; and traditional “bûche de Noël” Yule logs.

“I like to bring together flavors that evoke childhood memories–good childhood memories and hopefully not [bad] flashbacks,” Easley says with a laugh. “When I was barely able to reach the counter, my aunt had me up on a chair to bake chocolate chip cookies.”

Easley likes to experiment with various harmonizing flavors, “natural combinations like caramels and pears or apples and walnuts,” she explains.

She offers the following timesavers for home bakers: “Make the pie dough ahead of time, roll it out, cover it really well, and freeze it. Then let it defrost a bit before putting it in the oven, or roll it out the day before and keep it covered in the refrigerator,” she says.

“And make holiday cookies ahead of time and keep them in the freezer in Ziploc bags. Then pull them out and decorate them later.”

“Always use the best possible ingredients or you might as well just buy the pie from a big-box discount store. Use good-quality unsalted butter, imported chocolate bars, and real vanilla extract instead of artificial,” she says. “Oh, yes, and put a lot of love into it.”

If you can’t decide between the two holiday favorites, this pie from Renaissance Pastry offers the best of both worlds.

To make pie crust: In a food processor, cut together the flour, salt, and cold Crisco by pulsing until mixture has a texture like cornmeal. Add cold water and pulse. Mixture should form a ball and travel around the bowl. Add more water if you don’t see that. (If you don’t have a food processor, use a bowl and cut in fat with a pastry blending tool or two cold knives.) Do not overmix or dough will be tough. Form into a ball. It is not necessary to refrigerate unless you have overmixed. Roll out dough on a lightly floured surface until approximately 12 inches in diameter. Ease onto a 9-inch pie plate to avoid stretching. Trim edge to 1/2 inch beyond edge of crust and make a decorative border. Refrigerate until ready to use.

To make filling: In a medium bowl combine Karo syrup, brown sugar, salt, and melted butter. Stir in eggs and mix well. Add pumpkin, spices, and vanilla. Add nuts and pour into unbaked pie shell. Bake at 350 degrees for 20 to 30 minutes. Cover edges of crust if it browns too quickly. Pie is done when firm and slightly puffed.