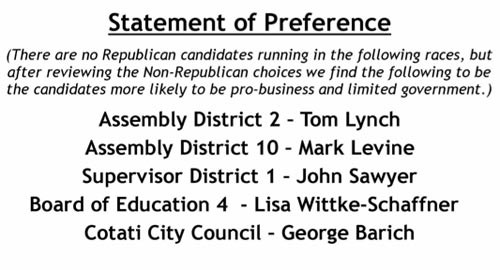 Last week on KSRO’s ‘The Drive,’ Steve Jaxon hosted a lively debate between John Sawyer and Susan Gorin, both candidates for Sonoma County First District Supervisor. You can listen to the full debate below, which covers a lot of ground on candidates’ histories, key votes on Santa Rosa City Council and positions on pension reform.

Note a particularly testy exchange at about 27:03, after Sawyer opts not to support Prop. 30 because of his distrust of Gov. Brown:

Gorin: “Well, maybe that’s why you’re recommended by the Republicans and I’m endorsed by the Democrats.”

Sawyer: “Well I’m not recommended by… you make it sound like I’m endorsed by them, and I know that your campaign has made a point of making me sound like a Republican, and it’s a very interesting… another scare tactic on the part of your campaign to try to make people think that I’m not a Democrat. I think that’s just…”

Sawyer: “You know what? I can’t control the Republican party.”

Who’s right? A quick check over at the Republican Party of Sonoma County’s website finds that indeed, John Sawyer is recommended by the party in their list of endorsements, but because he is not a registered Republican, falls under a technical exemption from the specific word “endorsement”:

In all likelihood, Sawyer must be aware that being a Republican is the kiss of death in Sonoma County politics, and that candidates who’d clearly be Republican in other counties simply call themselves “conservative Democrats” here in order to survive at the ballot box. On a related note, those campaigning for Sawyer evidently know the tried-and-true Republican technique of taking an accusation leveled against themselves and throwing it right back at their opponent, no matter how unwarranted. Here’s the latest anti-Gorin mailer out by the “Sonoma Jobs Action League,” an IE largely funded by the Sonoma County Alliance:

If you ask me, that looks a hell of a lot like the work by Steve Rustad, the political cartoonist for the Argus-Courier who was suspended by the newspaper for the breach of ethics in anonymously illustrating hit-piece mailers in support of David Rabbitt in 2010. (Rustad and the Argus-Courier parted ways in June of this year, so he’s free to design political mailers again.)

But… “masquerading as a Democrat”? Really?