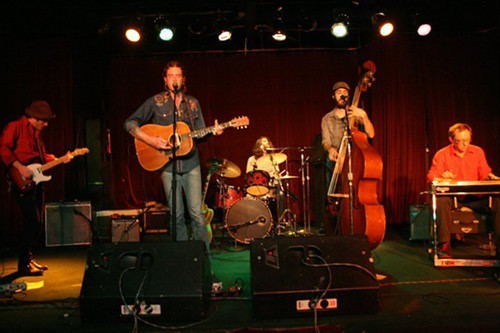 With the death this week of Levon Helm, the world lost one of country-rock’s finest ambassadors. As drummer and singer for The Band, Helm was at the forefront of a musical movement, along with The Birds, Bob Dylan, Flying Burrito Brothers, Gram Parsons, and even Led Zeppelin at times, that combined, to fine effect, the rough-and-tumble feel of rock with the rangy, winsome tones of country music.

Fortunately, Sonoma County has produced its own country-rock ambassador in John Courage. On Saturday, April 21 at the Last Day Saloon, he celebrates the release of Don’t Fail Me Now, his first album to feature the bona fide, full-blown band known as John Courage and the Great Plains. A springtime release date is perfect for this smooth-toned, solidly produced album. Just like the black velvet drawing on the back by local artist Mica Jennings, the album is a prime soundtrack for poolside hangout sessions with a cold drinks and friends, or maybe long stints on the road driving to deserts and mountains.

While some of the lyrics are in the vein of “yearning for a pretty, long-haired lady in a short skirt who understands that behind my stoic, highway-burned face is a man who just needs real love,” the songs have an expansiveness that probably comes partially from the time Courage (nee Palmer) spent in living in New Mexico’s high desert a few years back. In one of the album’s best moments, on the song “Heartbreak Man,” the unapologetic narrator says goodbye without looking back, in the morning, or “under cover in the middle of the night,” and the lady and town about to be left behind are gifted with this caustic observation, “I miss my life back on the West Coast/I forgot my true identity/No one here knows my god-given name/They’re just in love with the fantasy.”

“Old Faithful Pulse” explores the three M’s: mortality, mystery, and misery. It sets the tone for the ensuing set of songs, well-crafted melodies that build up to crackling, sing-a-long choruses, of the type to be sung in hot, southern bars, where the only requirement is a beer in hand and a lost love lingering in the shadows near the jukebox.

The song “Middle Man” is a bluesy juke joint tale of lies and cheating, “If it all ends tonight,” Courage sings, “How it all went down.” Money trees, devil tea, and bad men on the horizon, it’s all in there, sung with an convincingly burning sarcasm. It tells a story, and reminds us that often times the best music is told from the distant third, not necessarily the close first.

On many songs, Courage’s voice carries the languid, passionate, caramel tones similar to Chan Power from Cat Power, and though, at times, the songs are as world-weary—filled with hustlers and heartbreakers— as the famously world sick front woman’s, the album’s 21st century wild west territories are subtly optimistic, bathed in golden California sunlight. The title track has a surprisingly poppy bridge, where the up tones are kicked up a notch with dulcet bell tones that might have come straight off Smashing Pumpkin’s Siamese Dreams. “You take the mountain, I’ll take the crown,” sings Courage, simultaneously giving in and remaining hopeful.

On the last track, Courage wails, “I sold my soul, for rock-and-roll” in a somber, nearly cracking voice that belies his age, singing softly, sadly—-seeming over it before he’s even started. “It ain’t paying up,” he bemoans in the chorus. Yet, in actuality, with this new album, music’s melodic riches have truly bestowed themselves on this particular lanky, red-headed West Coast son.

Here’s a video for Courage’s home demo “Game of Charades.” It’s not on the album, but it’s a nice, pensive tune.