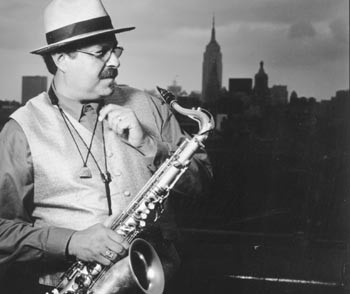 “It’s all about collaboration and trying to develop your ideas within the atmosphere and the sounds that are happening all around you,” says jazzman Joe Lovano, during a phone interview from his Seattle hotel room. “With all the great bands in the history of jazz–say, the Miles Davis Quintet, at any period–the energy of the players at that moment created that music, it wasn’t just a matter of trying to tell anyone how to play.

Ask tenor saxophonist Joe Lovano about his meteoric career–he just picked up the 2001 Downbeat! Critic’s Poll Jazz Artist of the Year honors–and the conversation quickly turns to the performers with whom he has played over the years.

Lovano–who performs Aug. 12 with his Grammy Award-winning nonet at the Festival on the Green in Rohnert Park–thrives on collaboration, both in concert and on record. He honed his chops as a teen, immersing himself in the Cleveland jam culture and playing bebop with his saxophonist father, Tony “Big T” Lovano. From 1976 to 1979, Lovano, a Berklee School of Music grad, apprenticed under legendary big-band leader Woody Herman and his Thundering Herd, performing with such sax greats as Al Cohn and Zoot Sims. “I was in my early 20s at the time and really learned a lot about that attitude,” says Lovano, who peppers his enthusiasm with a quick laugh. “I was intimidated and shaking like a leaf, but I also had the confidence to play because I was in that music and knew their music.”

One night, at age 23, he got the chance to perform a duet of “Early Autumn” with tenor giant Stan Getz at Carnegie Hall. “It was a thrill to play with him and try to blend my sound with his. I was terrified,” he says, “but I came through because the music takes you to another place. Once I realized that I made it through that, it was a big stepping stone to the next level. I’m still feeling off of that.”

Since the mid-’80s, Lovano has been a charter member of Charlie Haden’s Mingus-inspired Liberation Music Orchestra and has worked with Jack McDuff, the John Scofield Quartet, the Mel Lewis Orchestra, Dave Brubeck, Elvin Jones, Lee Konitz, and a host of others.

He also has 20 solo albums to his credit, including the recent trio excursion Flight of Fancy, Vol. II (Blue Note). Those recordings and his live shows always leave plenty of room for other players to shine, providing a chance for Lovano to savor some of the players he calls the unsung heroes of the genre.

“I want to go out and play, and I want to hear cats play,” he muses. “When I’m not playing, I want to hear some playing. . . . If it weren’t for the players through the generation of jazz that lived to play, we wouldn’t even have this music. A lot of people play to live, but you have to live to play, too. And those are the stronger players who play with a real passion and love in their sound.”